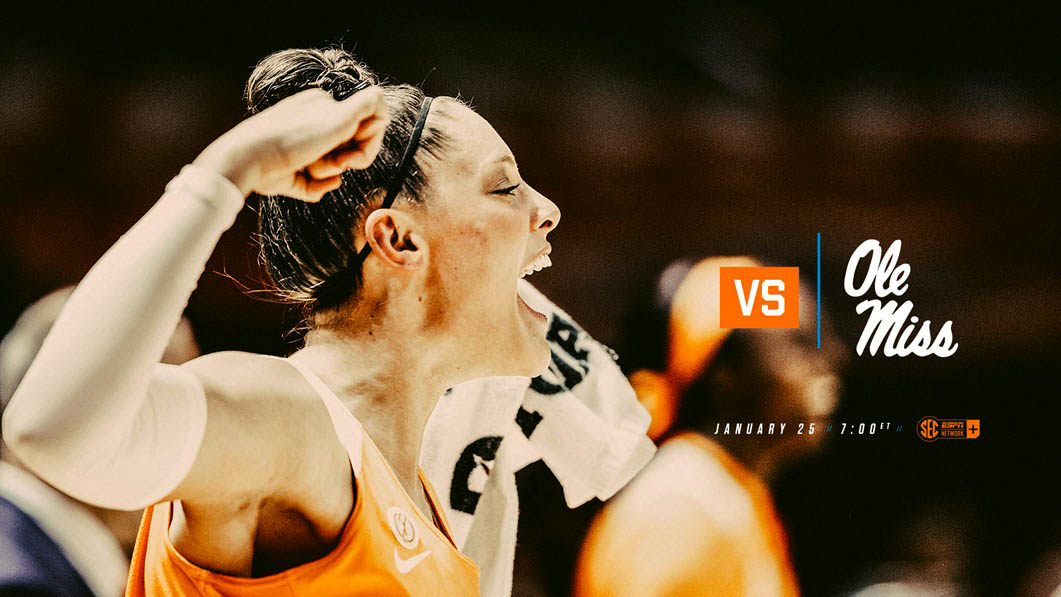 The match-up will be the Lady Vols’ first against an unranked foe since Vanderbilt played on The Summitt on January 7th.

Facing a gauntlet of four ranked teams in 11 days, including three top-10 squads and two in the top five, UT has dropped two in a row and three of its last four games. 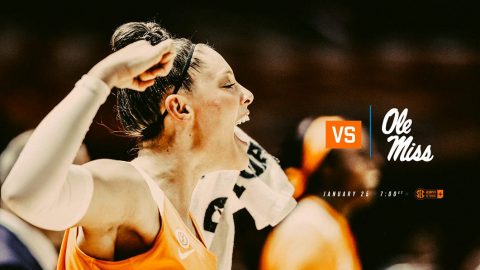 This will mark the second straight opponent from the Magnolia State, as the Lady Vols fell to #3/3 Mississippi State in Knoxville on Sunday, 71-52.

Ole Miss comes to Rocky Top also seeking a win, having lost three games in a row, five of six and seven of its last nine, including a 61-60 decision at Florida on Sunday.

The Rebels are 1-5 on the road this season, including 0-3 in league play.

Pregame high-five tunnel for first 50 kids every game! Pick up a wristband for the tunnel at section 113 on the concourse.

Post-game autographs with Meme Jackson at section 116 on the concourse.

We Back Pat Week Continues

Sunday’s Mississippi State contest was UT’s We Back Pat game, and a season-high crowd of 13,436 turned out to support the cause.

The initiative began in collaboration with the SEC basketball coaches is dedicated to remembering legendary Tennessee women’s basketball head coach Pat Summitt and bringing awareness to the Pat Summitt Foundation.

The Pat Summitt Foundation was created by Pat and (son) Tyler Summitt in 2011 to support organizations that deliver care to patients with Alzheimer’s disease, provide resources for caregivers and families, and conduct research for treatment and a cure.

You can visit www.patsummitt.org to learn more about the Pat Summitt Foundation.

In 2016-17, Tennessee finished second among all Division I women’s programs in per game home attendance at 9,184, a mark that would have ranked 49th among all DI men’s programs.

ESPN’s Charlie Creme has Tennessee projected for a No. 3 seed in the NCAA Tournament and slotted in the Kansas City Regional. Creme has the Lady Vols hosting a first round game vs. No. 14 Drake and meeting either No. 6 Oregon State or No. 11 Dayton in the second round.

Tennessee has another stretch of travel coming up, beginning with a trip to LSU for a noon CT (1:00pm ET) tip Sunday on the SEC Network.

That contest is the beginning of three games out of four on the road.

UT is 12-0 vs. unranked teams this season and has won 13 in a row vs. squads outside the top 25, including last year’s NCAA First Round win over Dayton.

The Big Orange women have won 14 of 19 games by double-digit margins.

Tennessee is surrendering 56.6 points per game against unranked teams and 78.4 vs. ranked foes.

Tennessee has owned a double-digit advantage at the intermission in 11 of 19 contests.

In Lady Vol history, the most recent long streak for the same starting five reached 11 games in 2007-08, when Pat Summitt chose the same lineup of Candace Parker, Angie Bjorklund, Nicky Anosike, Shannon Bobbitt and Alexis Hornbuckle to report for the opening tip. UT went 10-1 in that span and went on to win the NCAA title with a 34-3 record and the SEC title with a 14-0 mark. In game 12, in the team’s visit to Chicago, Parker missed curfew and didn’t get the starting nod vs. DePaul on Jan. 2, 2008.

Russell (8) and Nared (7) have led UT in scoring the most times, followed by Hayes and Meme Jackson (2), and Davis and Westbrook (1).

Tennessee has outscored its opponents in the points-in-the-paint category in 14 of 19 games, averaging a 41.9 to 31.4 difference.

Tennessee shot its second-best field goal percentage of the season (56.9) vs. Notre Dame.

Tennessee is No. 10 in three-point field goal percentage defense (26.5).

The Lady Vols have won 17 straight over the Rebels in Knoxville, with the last Ole Miss victory (69-65) coming on January 31st, 1987, in Stokely Athletics Center.

UT improved its record vs. the Rebels to 20-2 in Knoxville on February 18th, 2016, coming from behind and holding off Ole Miss, 57-51, at Thompson-Boling Arena.

Holly Warlick has had to face both Matt Insell (Ole Miss) and his father, Rick (Middle Tennessee), as Tennessee’s head coach, and she has a 7-1 mark vs. the family, including 5-1 vs. Matt Insell.

The Lady Vols are 1-1 vs. UM in overtime games.

UT played its longest game in program history versus Ole Miss in 1983, as the two teams battled to triple overtime in the NCAA Mideast Regional semifinal with the Lady Vols winning, 90-83, on March 25.

The 2016 meeting in Oxford was the first time these teams had met with neither program ranked.

In one of the more unique games in the series, a February 24th, 2011, contest in Oxford was shortened due to torrential rains leaking through the roof onto the playing floor. Tennessee was a 66-39 victor in that game, which was halted with 5:24 remaining.

Former Ole Miss All-American Peggy Gillom still holds a share of the UT school record for most points in a single game by an opponent. Gillom rang up 45 points (on a record 21 field goals) against the Lady Vols on February 4th, 1978 in Stokely Athletics Center.

Despite overcoming a 12-point deficit in the first half and leading by as many as 13, Tennessee could never close it out in a 67-62 loss to the Rebels at The Pavilion at Ole Miss on January 12th, 2017.

Redshirt junior Diamond DeShields recorded her third double-double of the season with 13 points and 12 rebounds, which tied a career high. Junior Jaime Nared posted another dominant performance, scoring a career-high 23 points to go along with seven rebounds.

Madinah Muhammad led the charge for the Rebels, finishing with 21 points on 7-of-17 shooting. Shandricka Sessom chipped in 14 points, 11 rebounds and four assists on the night.

The Lady Vols started slow in the game, shooting only 25 percent from the field compared to Ole Miss’ 50 percent in the first quarter. Nared tallied five points and rebound, as the Rebels led, 21-11, after 10 minutes of play.

Facing a 10-point deficit, UT came out firing on all cylinders in the second stanza. Tennessee outscored Ole Miss, 21-6, behind 12 points by Nared in the quarter. The Rebels struggled to get shots to fall, converting only three of their 13 attempts. The Lady Vols went into halftime with a 32-27 lead.

Ole Miss fought back into the game during the third period after UT pushed the margin to 13 with 7:30 left in the stanza, cutting Tennessee’s lead to two points at 49-47. The momentum stayed in the Rebels’ favor, as they held off the Lady Vols at home.

Bashaara Graves posted a double-double with 15 points and 12 rebounds, and No. 24/RV Tennessee enjoyed timely contributions off the bench from Meme Jackson and Kortney Dunbar to take a 57-51 win over Ole Miss on February 18th, 2016, at Thompson-Boling Arena the last time these teams played in Knoxville.

Graves scored 11 of her 15 points in the first half and her 12 boards were her most since collecting 12 against Kentucky on January 25th. Te’a Cooper and Jaime Nared scored 10 points each.

Shandricka Sessom led Ole Miss with 21 points on 8-of-17 shooting. A’Queen Hayes added 12 points and eight boards for the Rebels.

The Rebels went on a 10-0 run in the middle of the fourth quarter and briefly led 51-50 with 2:30 remaining. Dunbar answered with a fast-break layup and hit a 3-pointer from the left wing in UT’s next possession to spark Tennessee’s game-ending 7-0 run.

The Lady Vols caught fire in the third quarter, outscoring Ole Miss 16-6 to seize a 46-39 lead. Jackson brought energy off of the bench for Tennessee and capped the quarter with a pair of jumpers in the final minute of the third, including a pull-up 10-footer with three seconds left that ignited the crowd. UT forced 10 straight misses by the Rebels, as the Lady Vols swung momentum in their favor.

Ole Miss will try to get back on the winning track after dropping three straight and five of its last six.

The Rebels have one-point losses in league play to Arkansas and Florida, beat Florida in Oxford in two overtimes by three and were blown out by South Carolina, Mississippi State and Missouri.

Florida overcame a 13-point Ole Miss lead at the end of the third frame to prevail, 61-60, in Gainesville on Sunday.

Ole Miss is led in scoring by Madinah Muhammad, who is averaging 17.2 per game. Alissa Alston chips in 14.7 ppg., while Promise Taylor is just shy of scoring in double figures at 9.7.

The Rebels are missing the talents of Shandricka Sessom, whose leadership and 15.1 ppg. were lost for the season due to a knee injury suffered vs. MTSU.

Head coach Matt Insell is the son of MTSU coach Rick Insell, and the son ended up beating his father’s team in their match-up this season in Oxford, 65-56.

Ole Miss fell in heartbreaking fashion at Florida, with the Gators knocking down a go-ahead layup with 27 seconds to play for a 61-60 win over the Rebels on Sunday.

Florida took its first lead in nearly two quarters at the 3:22 mark, but Promise Taylor (12 points, two blocks) broke the run with a layup at 2:31 to cut the Gator lead to 59-58, setting up a wild run during the final minutes.

Junior Alissa Alston, the leading scorer for the Rebels at 17 points, took the lead right back for Ole Miss on the next possession on a layup, making it a 60-59 game, but Florida’s Haley Lorenzen (18 points, 13 rebounds) put back a missed three-pointer for the game-winning layup with 27 seconds to play.

The Rebels had a chance with 8.1 seconds to play, but Alston’s layup was blocked by Lorenzen and picked up by the Gators for the win.

Mercedes Russell recorded 16 points on 7-for-9 shooting, but No. 6/7 Tennessee was unable to overcome a 13-point halftime deficit in a 71-52 loss to No. 3/3 Mississippi State on Sunday at Thompson-Boling Arena.

After Anastasia Hayes made it a seven-point game with a free throw early in the fourth quarter, MSU was able to shut down UT offensively, allowing no field goals over the final eight minutes while closing the game on a 14-2 run.

The Lady Vols cut the lead to seven, 57-50, with 7:19 to go in the contest, but they were met with more offensive struggles the rest of the game and recorded a season-low eight points on 2-for-14 shooting during the period. MSU, meanwhile, shot 47 percent from the floor, and was able to pull away down the stretch thanks to a Tennessee scoring drought that lasted 3:44.