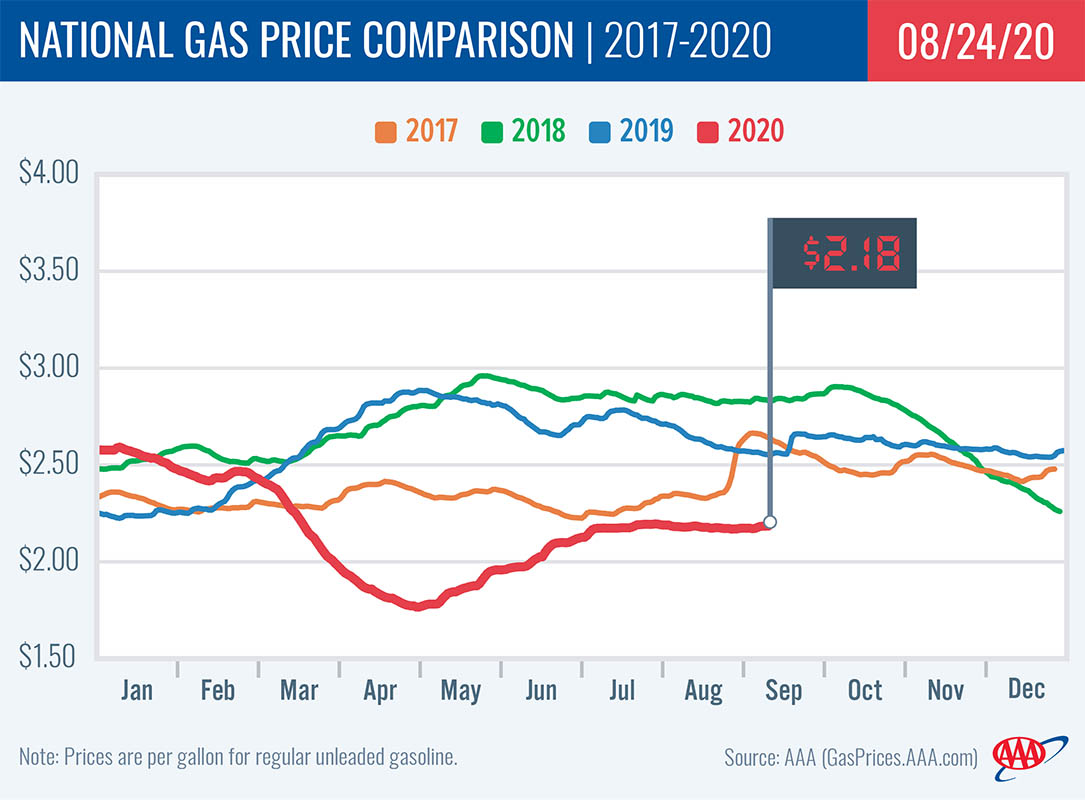 All Eyes on Tropical Storms

Tampa, FL – At $2.18, the national gas price average increased by one cent on the week according to AAA. That is the same price as a month ago and 41 cents cheaper than a year ago.

The minimal change reflects the slow movement at pumps across the country on the week. The vast majority of states (30) saw pump prices fluctuate by a penny, if at all. 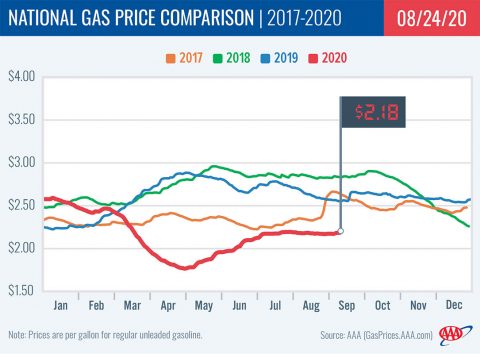 The increase in these states could be a result of increased demand, but nationally demand saw a one week decline.

The Energy Information Administration recorded gasoline stocks at their largest one-week draw since May. Total stocks fell by 4 million bbl down to 243.7 million bbl. Year-over-year, stocks are at a 10 million surplus while demand sits 1.3 million b/d less. U.S refinery utilization rates continue to hover at 80%.

This week the market is watching Tropical Storms Marco and Laura. Marco, whose force is decreasing and is expected to be a tropical depression late on Tuesday, is less of a concern. However, Laura is forecasted to move into the southeastern Gulf of Mexico and become a hurricane by early Tuesday.

According to the U.S. Department of Interior’s Bureau of Safety and Environmental Enforcement, approximately 58 percent, or 1.065 million b/d, of crude production in the Gulf of Mexico has been shuttered ahead of the storms and 114 (18%) platforms evacuated.

While gasoline stocks remain at a healthy level, if platforms and rigs are offline for an extended amount of time, supply could tighten and gas prices could be impacted. AAA will continue to monitor activity and provide related gas price updates.

At the end of Friday’s formal trading session, WTI decreased by 48 cents to settle at $42.34 per barrel. Crude prices were supported by growth in the strength of the U.S. dollar. Additionally, domestic crude prices decreased despite EIA’s weekly report revealing that total domestic inventories decreased by 1.6 million bbl last week, lowering total stocks to 512.5 million bbl.

Motorists can find current gas prices along their route with the free AAA Mobile app for iPhone, iPad and Android. The app can also be used to map a route, fin