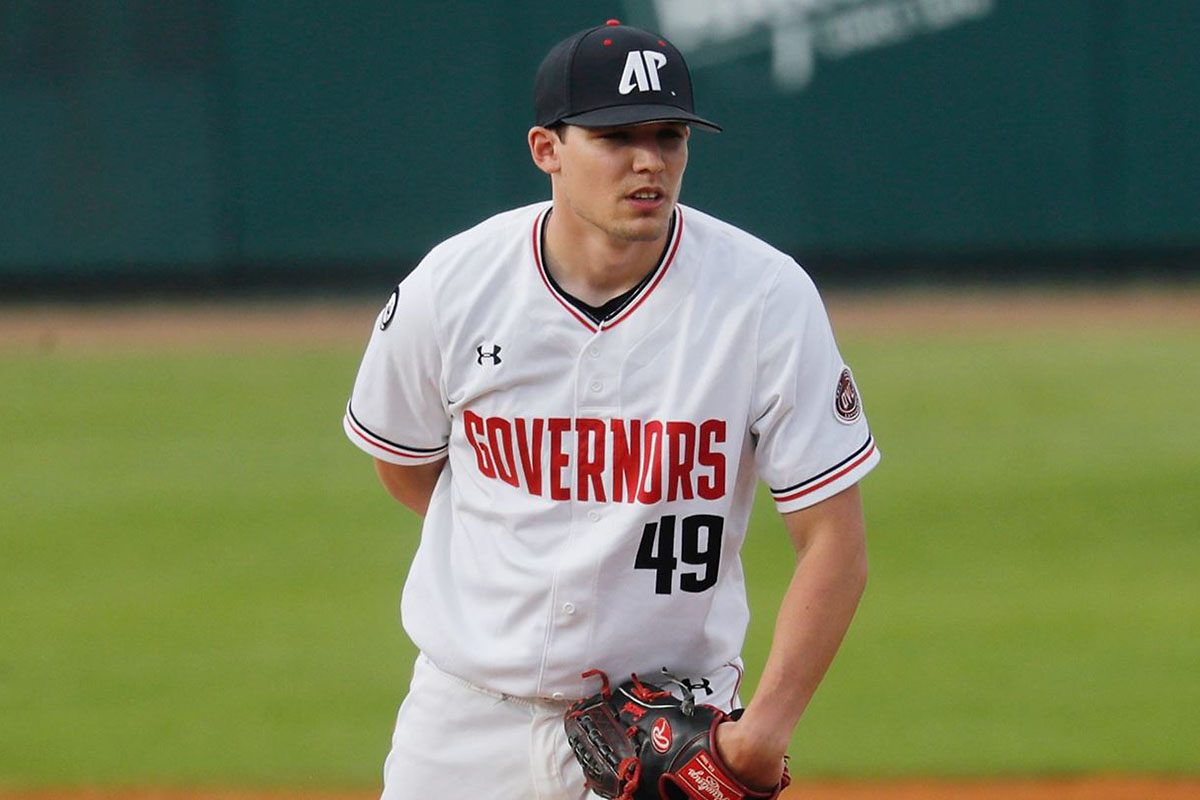 The Governors leveled their record during the road trip courtesy of an Ohio Valley Conference series victory at UT Martin, Friday-Saturday.

Austin Peay State University pitching held the Skyhawks to eight runs during the series, the fewest allowed in a three-game set since 2014.

The APSU Govs bats pounded out 18 runs on 25 hits in the first two games of the series before falling in a 1-0 pitcher’s duel to end the set.

The Series: 80 previous meetings, VU leads 53-25-2
Previously: APSU won the 2019 meeting, 7-6 in 10 innings, at Vanderbilt
Notably: Vanderbilt has dominated the series since Corbin’s 2003 arrival in Nashville, winning 16 of 19. The APSU Govs three wins since 2003 are the 2009 and 2010 games in Clarksville and the 2019 contest in Nashville. Austin Peay State University and Vanderbilt famously met in the 2007 NCAA Tournament’s Nashville Regional which featured a matchup of future MLB pitchers in David Price and Shawn Kelley, Vanderbilt prevailing 2-1 in 11 innings.

Drew McIllwain (RHP) vs. Thomas Schultz (RHP)
McIllwain will make his third start of 2021. He was the Govs’ Game 3 starter at Eastern Kentucky and at Morehead State before coming out of the bullpen at UT Martin, Saturday. He has a 3.55 ERA in 12.2 innings pitched with 15 strikeouts (10.65 K/9) in his last three appearances.

Austin Peay State University has recorded nine of its 10 double-digit hit outings this season since March 20th. The Govs are batting .300 and averaging 6.9 runs over the 17-game stretch that has seen them win nine games.


Catcher Jack Alexander went 5-for-9 with three doubles and three RBI in the UT Martin series last weekend, including a 3-for-5, two double effort in Game 2 of the set. It was his team-leading fourth three-hit outing this season.

Third baseman Gino Avros hit a leadoff home run at Ole Miss, last Tuesday, and added a double for his fourth-straight multi-hit game. He extended his reached safely streak to eight games over the weekend and has a .500 OBP during the streak, batting .429 (12-for-28).

John Bolton has been the ASPU Govs starting shortstop the past four games and posted a hit in all three games of the UT Martin series, his first three-game hit streak of the season.

Outfielder Knaje Guthrie made his first collegiate home run count, hitting a grand slam in Game 2 of the Morehead State series, April 9th. He went 3-for-9 with two RBI in the UT Martin series.

Bobby Head moved to right field for the UT Martin series – his fifth different position started in 2021. He has been the APSU Govs best hitter in April, batting .381 (16-42) with nine RBI and 11 runs scored.

First baseman John McDonald had a hit in all three games of the UT Martin series, batting .357 (5-14). He has a seven-game hit streak and a 13-game reached safely streak in league play.

Center fielder Garrett Spain has been Austin Peay State University’s best bat on the road this season, leading the way with a .319 batting average, five home runs, a .611 slugging percentage and 16 RBI in the 19 true road games to date.

Second baseman Malcolm Tipler extended his hit streak to seven games during the UT Martin series. He is batting .375 (9-24) during the streak with three doubles and five walks.

The Governors newly constructed outfield of Guthrie, Spain, and Head combined to bat .310 (9-for-29) with seven RBI and nine runs scored during the UT Martin series.

Avros is ranked 39th nationally in total walks (26) while Alexander is ranked 53rd in total doubles (11) after hitting three during the UT Martin series.

Next Up For Austin Peay State University Baseball

Following Tuesday’s game, the Austin Peay State University baseball team returns to Clarksville to begin a nine-game homestand – its longest this season – with a three-game OVC series against SIU Edwardsville.