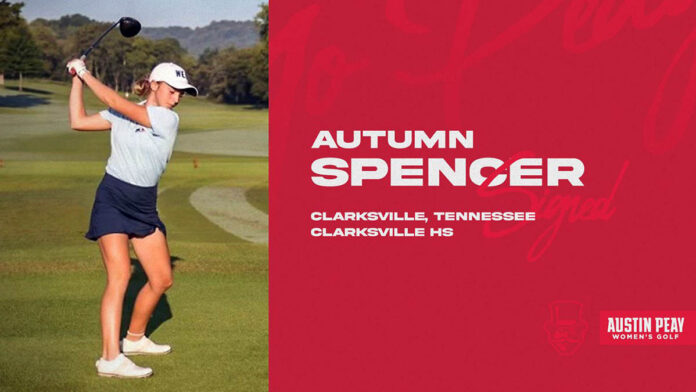 Clarksville, TN – After one of the most successful semesters in program history, Austin Peay State University (APSU) head women’s golf coach Jessica Combs is excited to announce the signing of Clarksville native Autumn Spencer during the 2021-22 early signing period.

“Autumn is a terrific golfer and a terrific young lady,” said Combs. “She has made a difference in Clarksville junior golf for years now, and we are excited to see the difference she makes during her four years of collegiate golf. We are thrilled to have her join the program!”

Spencer led the Clarksville High School girl’s golf team to a TSSAA Division I Large Class State Championship – the program’s first title since current Austin Peay State University golfer Riley Cooper led them to the championship in 2016 – as a senior this fall with a fourth-place finish at the state tournament.

Like Cooper, Spencer finished her prep carer with a state title and was named the All-Area Girls Golfer of the Year for 2021 by The Leaf-Chronicle. Spencer won the District 13-AA championship with a round of 72 and picked up the Region 7 title with a 69 at Swan Lake Golf Course, guiding Clarksville to victories in both events as well.

In 14 tournaments during her final year as a Wildcat, Spencer won a dozen times and posted an 18-hole average of 71.

While playing for Team West TN at the 2021 Tennessee Junior Cup, Spencer was named the MVP for her team at the event.

During the 2021 Sneds Tournament season, Spencer finished in the top 10 in all 14 events she competed in and finished tied for sixth at the Tournament of Champions at the Golf Club of Tennessee in Kingston Springs. During the 2020 season, Spencer won back-to-back events with a three-over 110 at the Elite @ Old Hickory CC and an even-par 144 at the Open @ Willowbrook CC.