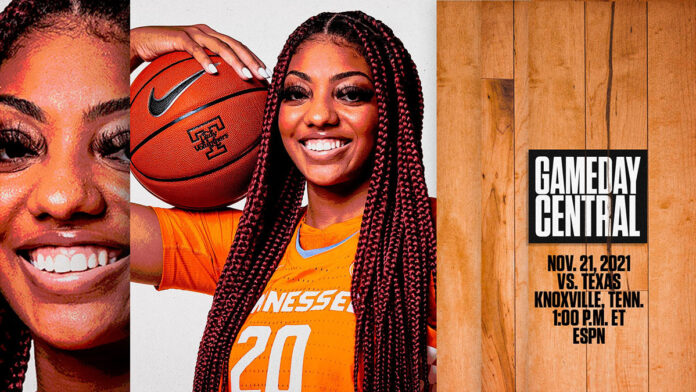 After opening the season with three games in a span of six days, including a road contest sandwiched in the middle, the Lady Vols had from Tuesday on to recover and focus on the Longhorns.

Sunday’s affair marks the third of three consecutive tilts vs. 2021 NCAA Tournament teams for the Big Orange. UCF, South Florida and Texas advanced to the first, second and Elite 8 rounds, respectively, of last year’s event in the San Antonio area.

Texas also represents the opening of a three-game set vs. Big 12 opponents, as the Lady Vols are eyeing upcoming neutral-site battles next week vs. Kansas and Oklahoma State at the South Point Thanksgiving Shootout in Las Vegas.

The duel with OSU will actually increase UT’s load to four 2021 NCAA Tournament teams in a five-game stretch, dating to the UCF contest.

UT enters game four after overcoming some adversity and finding a way to forge a 3-0 record. The squad did so despite losing sophomore forward and returning starter Marta Suárez for the season to injury and then seeing senior guard/forward and All-America candidate Rae Burrell sidelined indefinitely after going down during the opener vs. Southern Illinois. Both medical setbacks have been termed lower extremity injuries.

UT’s defense has carried the load while everyone adjusts to new roles offensively, holding Southern Illinois, UCF and No. 23/22 South Florida all to 49 points or fewer over the first three tests. UT outscored USF 14-5 in the fourth quarter to prevail on Monday night, 52-49.

Texas enters allowing the same 46.3 ppg. defensive average as Tennessee, but it’s scoring 93.3 ppg. after boosting its number with a 131-36 win over New Orleans in the opener. Most noteworthy, though, was the Longhorns’ 61-56 triumph on the road at No. 2/3 and defending NCAA champion Stanford on Nov. 14. Texas is coming off an 88-47 victory over Southeast Missouri on Wednesday.

Courtney Lyle (play-by-play) and Stephanie White (analyst) will be on the call for the ESPN broadcast.


A link to the live audio stream can be found on each game’s Hoops Central page or the Lady Vol schedule on UTSports.com.

Tennessee welcomes back to Rocky Top Tamika Catchings and fellow Lady Vol alums, as Big Orange Nation celebrates her 2021 induction into the Naismith Memorial Basketball Hall of Fame and the Women’s Basketball Hall of Fame. Sunday, she’ll be saluted at halftime of the Lady Vols’ game with Texas, and she’ll also receive recognition during Saturday night’s football game vs. South Alabama.

12K in TBA – Tennessee is aiming for a crowd of 12,000 or better on Sunday. There are several specials geared toward attracting fans to Thompson-Boling Arena.

Football/Basketball Offer – Fans can get in free to the Tennessee-Texas game when they show their football ticket from Saturday’s UT-South Alabama game.

Salute to Service – Current military members and veterans who present their Military ID or DD 214 at the Fan Experience tents outside Gates C & E receive complimentary admission for themselves & immediate family members on Sunday.


In addition to complimentary admission for active military and veterans, free parking and shuttle service is available for Lady Vol basketball games from UT’s Ag Campus.

This year’s week-long celebration of Tennessee’s ultimate Volunteers includes special recognitions, ceremonies, celebrations, and opportunities for veteran and military families to attend a football, men’s basketball, women’s basketball, and volleyball game free of charge. Since the introduction of the week-long recognition in 2018, Tennessee Athletics has welcomed thousands of military and veterans from across the southeast to numerous athletics events as part of Salute to Service Week.

Spark The Summitt – There are $5.00 tickets for all price zones (excluding courtside) available in advance or on game day, plus $1.00 tickets for kids 12 & under.

For more information about promotions, parking and fan information, please visit the Fans tab on UTSports.com and go to the Fan Experience page.

Overcoming a six-point deficit entering the fourth quarter, the No. 16/12 Lady Vols took down No. 23/22 South Florida at Thompson-Boling Arena, 52-49, on Monday night. With the win, Tennessee improved to 3-0 on the season.

Jordan Horston led the furious fourth-quarter comeback, scoring 12 of the 14 points for UT. The junior tied a career-high with 24 points, adding nine rebounds, four assists and a pair of steals. Her offensive prowess was complemented by Tamari Key’s dominance in the paint. Key pulled down 10 rebounds, five in the fourth quarter, scoring 10 points and blocking six shots. She posted the fifth double-double of her career and first this season.

The program secured its 489th win over a ranked opponent. In the current polls, the Lady Vols have five remaining ranked opponents on their schedule, including the next matchup with No. 12/21 Texas on Sunday.

Taking On Champs
The South Florida squad is the reigning AAC champion. The match-up was the first of four UT contests in which the Lady Vols will square off with conference champions during the 2021-22 campaign. Other conference champions on the schedule are South Carolina (SEC), Stanford (PAC-12) and UConn (BIG EAST).

Shot Swatting
Tamari Key recorded a season-high six blocks on the night to surpass Nicky Anosike (161), landing at seventh on UT’s all-tie career blocks list with 167. She is now 27 shy of catching Michelle Snow for sixth all-time at 194.

Holding Them To Five
The Lady Vols limited South Florida to five fourth-quarter points (on 2-of -16 FG/ 1-of-8 3FG shooting), marking the second time this season UT has held a foe to five or fewer in a frame. Tennessee allowed only five to UCF in the second period on Nov. 12 in Orlando.

About The Tennessee Lady Vols

Tennessee started a season 3-0 for the eighth time in nine years and will attempt to improve to 4-0 for the fourth occasion in five campaigns. UT dropped a road game in overtime at West Virginia in game three of the 2020-21 campaign.


Tennessee is up to No. 27 nationally in field goal percentage defense, a stat that Kellie Harper teams are known for. UT is allowing opponents only 30.3 percent from the field through three games.

Following her career-high-tying 24-point effort vs. South Florida, Jordan Horston has scored in double figures in six of her last seven games, including four of the last five contests in 2020-21.

Graduate transfer Alexus Dye, who averaged 12.6 rebounds per game last season at Troy, is pulling down 9.3 rpg. this season. She is second behind Jordan Horston (10.0 rpg.) in that category and is third in minutes per contest (27.7) and first in steals per game (1.3).

The Big Orange women have had three different players register double-doubles in their first three games this season, including Alexus Dye (12 pts./13 rebs.) vs. Southern Illinois, Jordan Horston (14/11) vs. UCF, and Tamari Key (10/10) vs. South Florida.

Freshman Brooklynn Miles is leading the team (29.3) in minutes played and has recorded six assists in three games while committing only three turnovers. She ranks second in assists per game (2.0) and is third in steals per contest (1.0).


Winning the rebounding battle vs. South Florida Tennessee now has claimed 49 of 59 board battles during the Harper era, while falling short seven times and tying twice. UT is 3-0 this season and was 22-2-1 (W-L-T on board advantages) last year and 24-6-1 in 2019-20.

While the first meeting in the series was on Dec. 8, 1978 (Tennessee 84, Texas 60), this marks the 39th-consecutive season these programs have met. The UTs played twice in 1986-87 and 1991-92 in regular-season tourney match-ups in addition to the regularly-scheduled games.

Tennessee was supposed to play in the Erwin Center one last time on Dec. 13, 2020, but COVID contact tracing forced a cancellation just before the Lady Vols departed the hotel for the game.

Tennessee is 58-24 all-time vs. schools currently in the Big 12 after falling at West Virginia in the SEC/Big 12 Challenge on Dec. 6 last season.

Popular Tennessee men’s basketball coach Rick Barnes, whose Vols are ranked No. 17 nationally, previously coached at Texas from 1998 to 2015.

About The Texas Longhorns

Texas was picked to finish in a tie for second in the 2021-22 Big 12 Preseason Coaches Poll.

The Longhorns posted a 21-10 mark and advanced to the NCAA Elite Eight during head coach Vic Schaefer’s first season in Austin in 2020-21.

The Longhorns knocked off No. 3/2 Stanford, 61-56, last Sunday at the Cardinal’s Maples Pavilion.

Schaefer was a three-time SEC Coach of the Year and a two-time national coach of the year while at Mississippi State from 2011-20, leading the Bulldogs to a 221-62 record.

They made five NCAA Tournament berths, including two NCAA Championship Game appearances during his time in Starkville.

Senior guard Joanne Allen-Taylor led the team in scoring with 13 points. Drawing her first start of the year, senior forward Lauren Ebo notched a double-double performance with 11 points to go along with a team-best 10 rebounds. Aliyah Matharu (11) and Rori Harmon (11) were the other Longhorns to finish in double digits.

Next Up For Tennessee Lady Vols Basketball

They follow that with another 3:30pmPT (5:30pm CT) match-up against Oklahoma State on Saturday, November 27th.

UT is slated to travel to Nevada on Tuesday evening and return on Sunday afternoon.

The game marks the return of Rae Burrell to her home city. She is a graduate of Liberty High School.