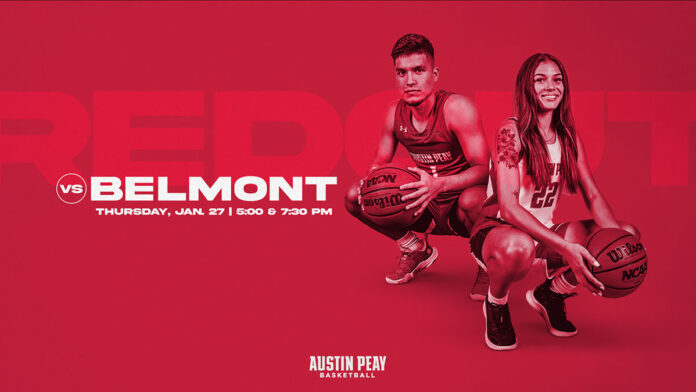 In association with the RED OUT, it’s the annual Austin Peay College of Business Night. Fans are encouraged to wear RED and arrive early to take part in the annual Monocles Up sweatshirt giveaway!

It’s an exciting start to Thursday’s ‘RED OUT’ as the women’s team hosts Belmont with first place in the Ohio Valley Conference on the line. It will be the second meeting of the season between the Govs and Bruins as APSU looks to avenge its 65-46 loss to Belmont back on January 13th. Austin Peay State University is currently riding a three-game win streak and has a 7-1 record inside the Winfield Dunn Center.

Concluding the night, the men’s squad squares off with Belmont for the first time this season in a pivotal OVC showdown. The APSU Govs look to knock the Bruins from atop the OVC standings in their second home game of 2022 and are averaging 75.3 points per game at home.

Purchase single-game tickets or the all-new Family Four Pack presented by The City Forum. Receive four tickets to both a men’s and women’s basketball game along with four attraction passes at The City Forum.

Packages start at just $22.00 and can be purchased by visiting letsgopeay.com/buytickets using the Promo Code: FAM4 or contacting the Govs Ticket Office at 931.221.PEAY (7329).