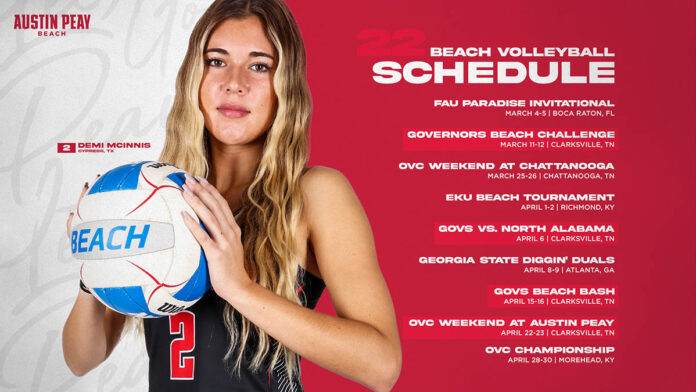 Austin Peay State University and head coach Taylor Mott – who has led the program since its inception in 2017 – kick off the season with their first-ever trip to Boca Raton, Florida, for the FAU Paradise Invitational.

The Governors will play Palm Beach Atlantic and Florida Atlantic, March 4th, on the first day of the event, before wrapping up the season-opening tournament against UNC Wilmington and future ASUN foe Florida Gulf Coast, March 5th.

Austin Peay State University then hosts the first of three home tournaments with the Governors Beach Challenge, March 11th-12th, at the Govs Beach Volleyball Complex. The Govs will play Carson Newman and Jacksonville State on the first day of the event, before playing Central Arkansas and Chattanooga.

A season-long eight-match road trip is next for the Governors, who will play the first of two conference weekends at the OVC Weekend at Chattanooga. Austin Peay State University will play first-year beach volleyball program Eastern Illinois and then host Morehead State, on March 25th, before taking on 2021 OVC Tournament runner-up UT Martin and Chattanooga, March 26th.

The second stop on the two-week road swing takes the Governors to future ASUN rival Eastern Kentucky for the EKU Beach Tournament in Richmond, Kentucky. The Govs will play Eastern Kentucky and Jacksonville State, on April 1st, before squaring off against North Alabama and Eastern Illinois, on April 2nd.

APSU’s lone midweek match is next on the slate when they play a doubleheader against future ASUN opponent North Alabama, April 6th.

Austin Peay State University hits the road for the final time in the regular season when it travels to Georgia State for the Diggin’ Duals. The Governors will match up with Alabama-Birmingham and Georgia State, on April 8th, before playing Chattanooga and Tampa, on April 9th, to wrap up the weekend.

Back-to-back weekends in Clarksville are next on the slate, starting with the Govs Beach Bash, April 15th-16th. Austin Peay State University opens the event with matches against Oklahoma Wesleyan and Eastern Kentucky on day one, before playing Jacksonville State and UT Martin on the second day of the event.

The regular season concludes with the final conference event of the season when the Govs host the OVC Weekend at Austin Peay State University. The Governors play UT Martin and Chattanooga, on April 22nd, before wrapping up the regular season with matches against Morehead State and Eastern Illinois, on April 23rd.