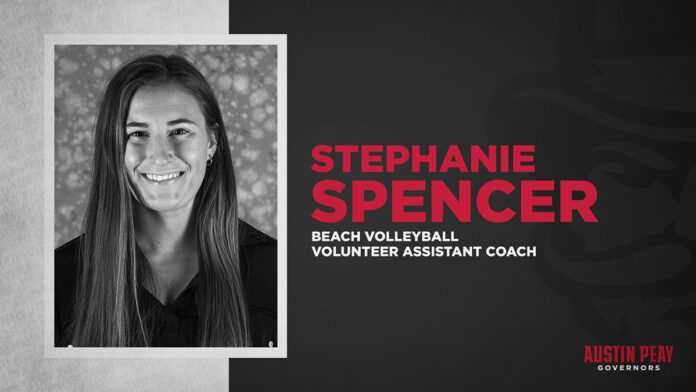 “We are so excited to have Stephanie join us for the beach volleyball season,” said Mott. “Stephanie has played volleyball at a very high level and that along with her beach volleyball knowledge will help our team this spring as we look to defend our Ohio Valley Conference title.”

“One of my favorite quotes by Kerri Walsh Jennings is ‘Passion is a huge prerequisite to winning’ – this can be applied to sports, life, work, etc.,” said Spencer. “If you do not have passion behind what you are doing, you will not find success. As my love and passion grows for beach volleyball and helping to lead, mentor, and coach a great group of girls, I am very excited to be a volunteer assistant for this team and am very appreciative for the opportunity Coach Taylor and Travis [Leblanc, associate head beach volleyball coach] have provided me.”

A native of North Canton, Ohio, Spencer spent the first two years of her volleyball career at Georgia Southern, where she was named to the 2015 Sun Belt Commissioner’s List and the 2016-17 Sun Belt Conference Academic Honor Roll.

Spencer racked up 423 kills and 261 digs while playing 208 sets over 60 matches for the Eagles. In her freshman season, Spencer led Georgia Southern to a 3-1 win at Georgia with a career-high 22 kills, while hitting .327 in the match.

After two years in Statesboro, Spencer transferred to Tennessee for the final two years of her college career. Spencer appeared in 38 matches and made 13 starts for the Volunteers, recording 47 kills and 61 digs in 81 sets. During her senior campaign, Spencer recorded a career-high .667 hitting percentage in a match against No. 20 Kentucky.

Spencer was named to the Southeastern Conference Academic Honor Roll during both her seasons in Knoxville. She was also named to the Dean’s List in all four years of her collegiate career.

Spencer graduated from Tennessee with a bachelor of science in education with a concentration in recreation sports management and a minor in business in August 2019. Since graduation, she has worked as a Software Technical Sales Representative and a Product Specialist Account Manager at Dell Technologies in Nashville.