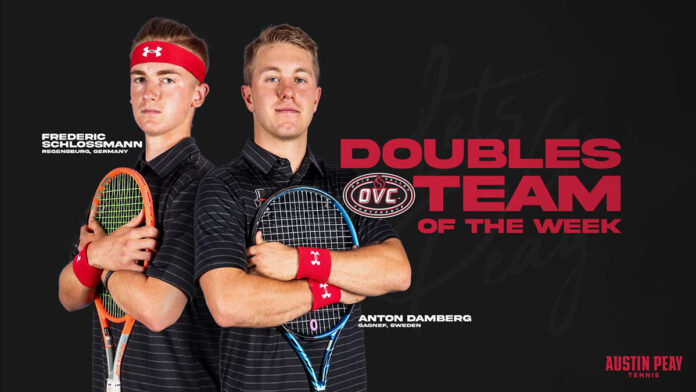 Schlossmann and Damberg defeated Southern Indiana’s Spencer Blandford and Preston Cameron, 7-6 (4), on the No. 1 doubles court to give the Governors the early lead in their match against the Eagles, Friday, at the Evansville Tennis Center in Evansville, Indiana.

The duo each won their respective singles matches against USI and helped lead the APSU Govs to a 4-3 victory against the future OVC member.

After three-straight victories, due largely to the strong and consistent play of both Schlossmann and Damberg, Austin Peay State University is currently off to its best start to a season since 2015 at 3-1.

An OVC Preseason Top-10 selection, Schlossmann earned the second OVC weekly honor of his career with this week’s selection. The Regensburg, Germany, native was named the OVC Men’s Tennis Player of the Week, April 14th, 2021, and was a Second Team All-OVC recipient last spring.

After being named the OVC Men’s Tennis Player of the Week last week, Damberg is the first player to receive a conference honor in back-to-back weeks since at least 2007. The Gagnef, Sweden native also joins Schlossmann and his former teammate, Almantas Ozelis, of players to have received multiple OVC weekly honors in their career under head men’s tennis coach, Ross Brown.

Schlossmann, Damberg, and the rest of the Austin Peay State University men’s tennis team return to action against West Florida, on March 8th, at the Ralph Carson Tennis Complex in Pensacola, Florida.