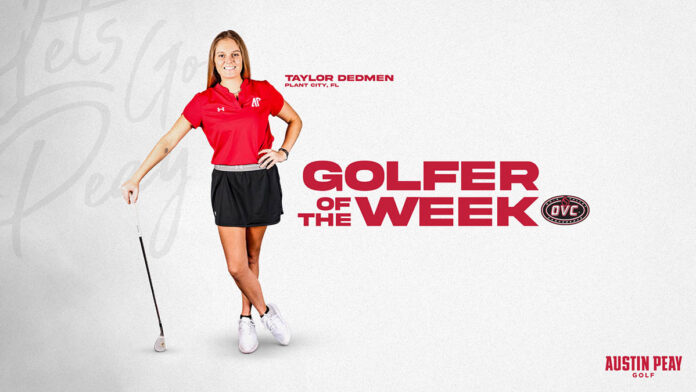 The Plant City, Florida native led the Governors with three-straight wins competing in the Oyster Shuck Match Play, hosted by The Citadel, at Charleston Municipal Golf Club in Charleston, South Carolina. In her first match of the event, Dedmen was dominant, beating Presbyterian’s Sanders Hinds, 6 and 5.

In the APSU Govs’ semifinal match, the senior was four down at one point on the back nine but won five of her final seven holes to claim a 1-up win over Samford’s Sophie Membrino. Dedmen’s par on her 18th hole ended up being the match-clinching point against Samford, with the Governors coming back to beat the Bulldogs in three-straight matches to pick up a 3-2 victory, despite dropping the first two matches.

In Austin Peay State University’s championship match against Western Carolina, Dedmen won handily again, beating Victoria Ladd, 5 and 4. Dedmen was one of two Governors – along with freshman Kaley Campbell – to post a perfect record in three rounds at the Oyster Shuck Match Play.

Dedmen is the first Governor to be named the OVC Female Golfer of the Week since she claimed the award as a freshman on March 13th, 2019.

Dedmen and the rest of the Austin Peay State University women’s golf team will be back in action at Houston Baptist’s Husky Invitational, March 14th-15th, at Riverbend Country Club in Sugar Land, Texas.