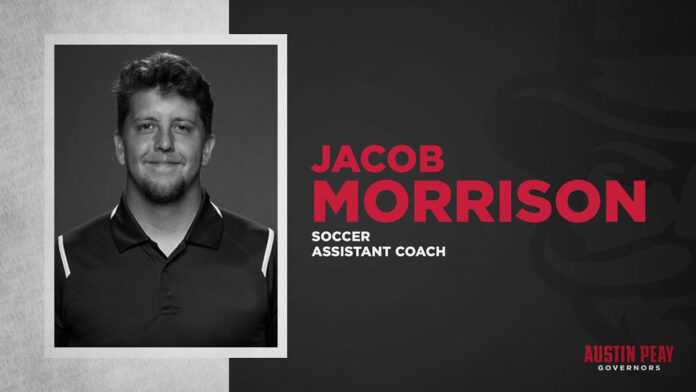 “Jake is a big-time hire for our program,” said McGowan. “Coming off a great year developing and working with the Big East Goalkeeper of the Year, I know he will contribute similarly at Austin Peay.”

Before coming to Austin Peay, Morrison spent the 2021 season as the Director of Goalkeeping at Xavier. In one season at Xavier, Morrison helped the program to a 16-3-1 mark – the best win percentage in program history – and a Big East regular-season championship.

Morrison also coached the 2021 Big East Goalkeeper of the Year, Olivia Jenkins, who ranked sixth in the NCAA and set the Xavier record with a 0.54 goals-against average. Jenkins also recorded 10 shutouts during the 2021 season, which was the seventh-best mark in the NCAA and the second-best single-season mark in program history.

During Morrison’s single-season in Cincinnati, the Musketeers also reached their highest RPI ranking (seventh) and highest United Soccer Coaches ranking (No. 11) in program history en route to an automatic bid to the NCAA Division I Women’s Soccer Championship.

“I am extremely blessed and humbled to have accepted the job at Austin Peay State University,” said Morrison. “I would like to thank Kim McGowan for giving me the opportunity to help this program, and I am excited to work with her and the excellent staff she has put together. I would also like to thank Nate Lie and the entire Xavier staff for helping me grow and helping me in my coaching journey. I am proud to be a Governor!”

While working at Xavier, Morrison also coached at the semi-professional and club level, serving as the Academy Director and Head Coach of the Ohio Valley Premier League U-23 squad for the Cincinnati Sirens FC of the Women’s Premier Soccer League. Morrison was also the Director of Coaching U14-U19 for the Cincinnati United Premier.

During the 2019 season, Morrison was a volunteer assistant coach for the men’s soccer team at Wright State. In his lone season at Wright State, Morrison helped the Raiders climb as high as No. 11 in the NCAA Men’s Division I soccer rankings.

Prior to his coaching career, Morrison was a first team all-conference goalkeeper at Ohio Christian, where he helped lead the Trailblazers to four-straight NAIA National Tournament appearances, including one appearance in the finals. Morrison holds the Ohio Christian record for goals-against average (0.79), consecutive shutouts (11), and single-season shutouts (14).

Morrison earned his bachelor’s degree from Ohio Christian in 2014, majoring in interdisciplinary studies with a minor in sport management. He received his master’s degree in sport sciences and recreation from Ohio University in December 2020.

To keep up with the Austin Peay State University soccer team throughout its spring season, follow Govs soccer on Twitter and Instagram (@GovsWSOC) or check back at LetsGoPeay.com for news and updates.