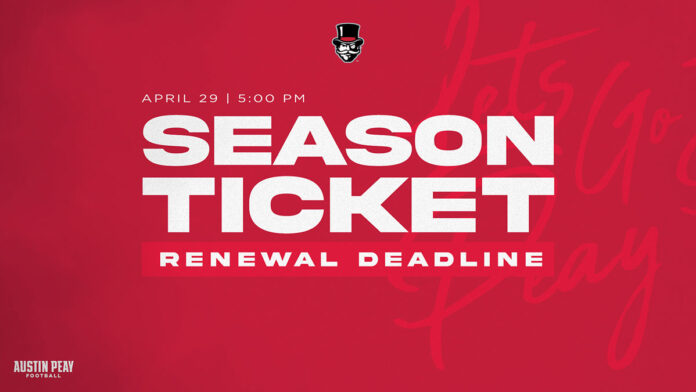 All 2021 season ticket holders can renew their tickets for the upcoming 2022 season starting Tuesday, April 29th, through 5:00pm online at LetsGoPeay.com/buytickets or by calling the athletics ticket office at 931.221.PEAY. Beginning May 2nd, all remaining seating locations will be made available to the public season ticket sales.

“It’s ASUN-ny new day for Austin Peay Football, and it is time for all of Stacheville to Level Up,” said APSU Vice President and Athletics Director Gerald Harrison. “I am confident our student-athletes and coaches will get the job done on the field, so we need our loyal legion of supporters to bring it each Saturday at Fortera Stadium. I encourage our fans to get their season tickets today and don’t miss out on an exciting 2022 season.”

Season ticket holder benefits for the upcoming season include memorabilia fashioned from the turf of Fortera Stadium, on which APSU clinched the 2019 Ohio Valley Conference Championship. Exclusive season-ticket holder events include a ticket pick-up party and early access to the 2022 fan fest.

In addition, season ticket holders will have the opportunity to purchase a ticket to the regular-season ending game at Alabama as the Governors make their first-ever trip to Bryant-Denny Stadium. Season-ticket holders also receive priority access to Austin Peay State University and Nashville Predators events. 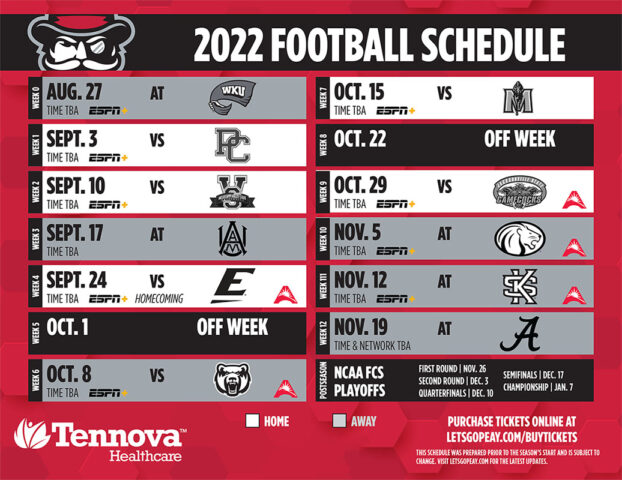