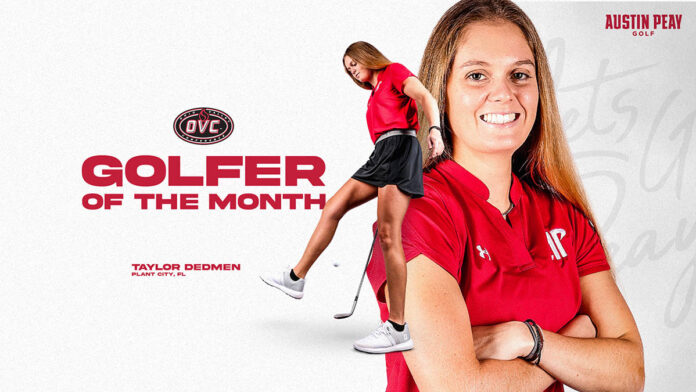 Brentwood, TN – After winning golfer of the week twice during the month, the Austin Peay State University (APSU) women’s golfer Taylor Dedmen was named the Ohio Valley Conference Golfer of the Month for March, the league announced Monday.

Dedmen started March with a 3-0 performance at The Citadel’s Oyster Shuck Match Play, helping the Govs to a runner-up finish in Charleston, South Carolina. Dedmen posted wins of 6&5 win and a 5&4 win at the event and won her three matches by a combined 12 shots.

Next, at Houston Baptist’s Husky Invitational, Dedmen was unable to post a final score or finish after a clerical error on her first-round scorecard, but she bounced back to post a 78 and 79 in the final two rounds with both numbers counting toward the team score.

Finally, Dedmen wrapped up the month with her first collegiate tournament win, winning Southern Illinois’ Diane Daugherty Invite in dramatic fashion. Dedmen trailed by a shot on the 54th and final hole of the tournament, but after driving the green at the par-four 18th, she sunk a long eagle putt to win.

The Plant City, Florida native’s three-round score at the Diane Daughterty Invite is tied with Reagan Green’s 220 at the 2019 Ohio Valley Conference Championship as the third-best 54-hole score in program history – Dedmen now has three of the top-five 54-hole scores in APSU history. 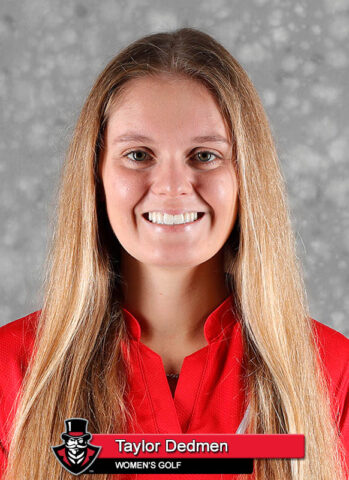 Dedmen’s win at the Diane Daugherty Invite marks the first individual tournament victory by a Governor since Green won Tennessee State’s 2018 Town and Country Invitational. She­ is also just the third golfer in program history to win a three-round tournament since digital recording keeping began, joining Chelsea Harris at the 2010 OVC Championship and Amanda Phillips at the 2001 OVC Championship.

In the five stroke play rounds Dedmen carded in March, she shot a 75.4 average and all five rounds counted toward Austin Peay State University’s score.

Dedmen, who was golfer of the week twice in March, is the first Governor to earn multiple OVC Golfer of the Week honors in the same season since her coach Jessica Combs – then Jessica Cathey – won the award twice during the 2015-16 season.

This is the first time Dedmen has been named golfer of the month in her career. She is the second Governor to win the award this season, joining freshman Erica Scutt, who was the OVC Golfer of the Month in October.