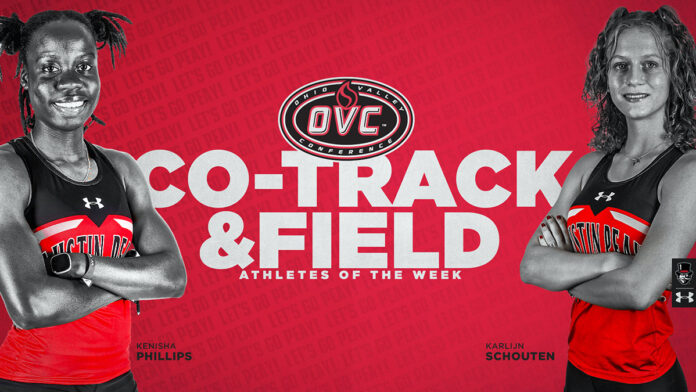 Junior Kenisha Phillips continued her stellar start to the outdoor season, picking up two victories at the WKU Hilltopper Relays last weekend. Phillips recorded a time of 54.84 to win the 400-meter dash, winning the event by 1.09 seconds. Her 400-meter time was the fastest by a Gov this season.

Phillips followed up her performance by winning the 200-meter dash with a time of 24.46. The Georgetown, Guyana native is the reigning OVC Outdoor 200m dash champion and has yet to lose in the event through two meets during the outdoor season.

Schouten earned her first victory of the outdoor season in the pole vault at the WKU Hilltopper Relays. Schouten won the event for the second year in a row with a mark of 4.05 meters. The Zwijndrecht, Netherlands native was the lone competitor to have a vault over four meters.

The junior pole vaulter is the reigning OVC Outdoor Pole Vault champion and has five victories in the event for her career. Over the past two outdoor seasons, Schouten has placed in the top three in pole vault in six of the nine meets.