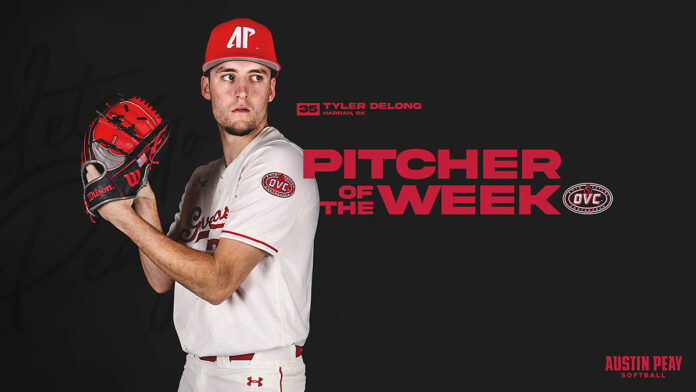 Delong, making his third start for the Governors, struck out a career-high nine batters and held host UT Martin to one run over a career-long 6.0 innings. He battled through a rough second and third inning, with the one run scored against him coming in the third inning.

However, after surrendering the one-out RBI single in the third he struck out the next five batters he faced. That began a string of 10-straight batters retired which pushed his outing into the sixth inning. Reliever Luke Brown pitched the final three innings, helping Delong to his first win as a starter.

It is the first weekly award for an Austin Peay baseball player this season. Delong becomes the first Governors pitcher to earn weekly honors since Jacques Pucheu won a share of the league’s April 15th, 2019 honor.

Austin Peay State University returns home for a three-game Ohio Valley Conference series against league-leading Eastern Illinois. Due to the upcoming Easter holiday, the series will begin with a  Thursday 6:00pm contest on Joe Maynard Field at Raymond C. Hand Park. The APSU Govs and Panthers will also play on Friday at 6:00pm followed by a Saturday 1:00pm finale.

This weekend is Youth Weekend at The Hand. Youth 12 and under will receive free admission to this week’s games against Eastern Illinois. In addition, APSU will have food trucks and an inflatable bounce house on-site during Saturday’s game.