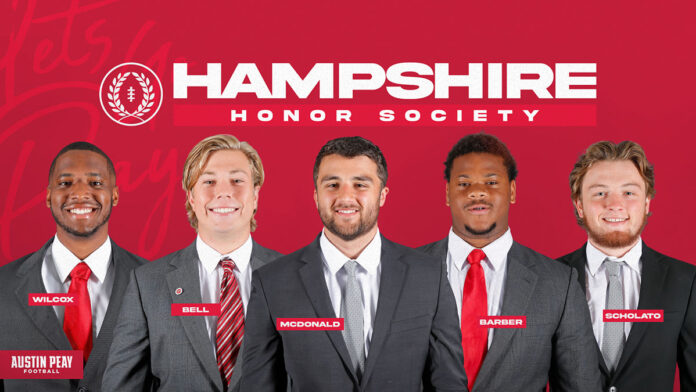 The NFF Hampshire Honor Society is comprised of football student-athletes who completed their eligibility during the 2021 season, maintained an undergraduate cumulative grade-point average of 3.2, met all NCAA-mandated progress towards degree requirements, and were starters or significant contributors to their team on the field. An extraordinary 1,559 student-athletes from 323 colleges and universities qualified for membership in the Society’s 16th year.

Barber, of Harrisburg, Pennsylvania, compiled a 3.3 GPA while majoring in general studies. He appeared in 10 games and made a pair of starts for the Governors during the 2021 season, recording eight tackles and 1.5 tackles for loss while providing an imposing presence on the interior of the defensive line.

A native of Hoover, Alabama, Bell posted a 3.76 GPA while majoring in management. He also made four starts at left tackle and appeared in 10 games on the offensive line in 2021. Bell played in 27 games during his Austin Peay career, including 12 games during the Govs’ 2019 OVC Championship season. The 6-3, 290-pound lineman appeared off the bench in the final eight games of the 2019 season, including all three FCS Playoff games.

Since McDonald’s move to the linebacker position in 2019, he ranked second among FCS tacklers with 259 takedowns, trailing only North Dakota State’s Jackson Hankey (267). McDonald racked up 71 total tackles, 6.0 tackles for loss, two interceptions, a forced fumble, and a fumble recovery in his final season as a Governor.

Hailing from Hendersonville, Tennessee, Hunter Scholato earned a 3.35 GPA while working on a bachelor’s in management and has earned a 3.33 GPA while pursuing a master’s in education. Scholato enjoyed his best season as a Governor in 2021, picking up 14 tackles and a half-tackle for loss while playing in nine games.

A Clarksville native, Wilcox transferred to Austin Peay prior to the 2020-21 season and worked towards a 3.72 GPA while pursuing a master’s in information assurance and security. Wilcox appeared in nine games for the Governors during his time in Clarksville.