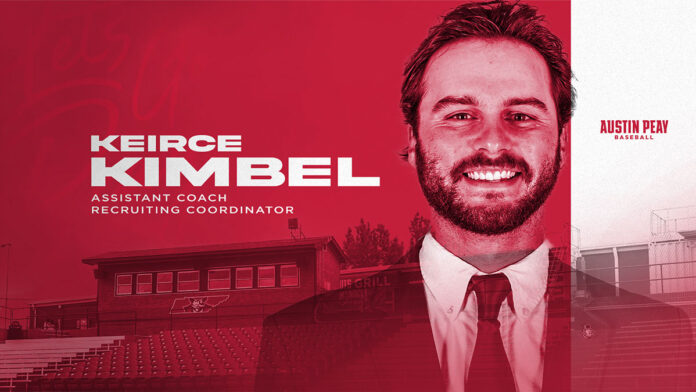 Clarksville, TN – Austin Peay State University (APSU) head baseball coach Roland Fanning‘s coaching staff will have a Governors alumnus as a member with Keirce Kimbel joining the staff as an assistant coach and will serve as the program’s hitting coach and recruiting coordinator.

“Getting Keirce back to Austin Peay is a game changer for our program,” said Fanning. “I was able to see his elite work ethic first hand during our time together at Kentucky. Watching the impact he has had on Evansville’s program the last three years while coaching on both sides of the ball has been really impressive. Keirce will use that knowledge to be our recruiting coordinator and work with our hitters daily.

“He is from Tennessee, played junior college on a World Series team at Columbia State here in Tennessee, and played at Austin Peay! We call him the ‘The Governor’ because he loves this place and his natural enthusiasm will no doubt make us better day in and day out.”

“Lucky is the best way to describe how I feel right now,” said Kimbel. “Baseball has paved a unique path in my life. It’s funny how it’s come full circle and brought me back home to my alma mater. Austin Peay baseball holds a special place in my heart and I plan to do my best to do right by all the people that have worn the Governors uniform. Getting the opportunity to work with Roland is a blessing, he made a significant impact on me during our time at Kentucky together and I genuinely believe he is the perfect fit to lead the Govs back to their winning ways. I can’t wait to get to work.”

Kimbel, a Franklin, Tennessee native, returns to Clarksville after completing his third season at Evansville. He was the Purple Aces pitching coach in 2022 and helped lead the team to a 32-24 record – the program’s first 30-win season since 2014 – and a second-place finish in the Missouri Valley Conference regular-season race. Kimbel helped coach Nick Smith to MVC Pitcher of the Year accolades and the Purple Aces, who hit a program-record 77 home runs, saw seven players selected to the 2022 All-MVC teams.

The previous season Kimbel was Evansville’s hitting coach in a 28-27 campaign after beginning his Evansville career as the volunteer assistant coach in the COVID-19 shortened 2020 season.

Kimbel began his coaching career at Kentucky where he was a graduate assistant for the 2018 and 2019 seasons where served alongside Fanning, who was a Wildcats assistant coach for three seasons (2017-19).


APSU Governors fans will remember Kimbel for his two seasons as a pitcher during the 2015 and 2016 seasons and returning to serve as the operations assistant in 2017. He made 30 career appearances in the red and white. He joined the Governors after beginning his career at Columbia State Community College where he made 39 appearances over two seasons. Kimbel earned his bachelor’s degree in agriculture business in 2016 at Austin Peay. He completed his master’s degree in sports leadership in 2019 at Kentucky.
Facebook
Twitter
Pinterest
Email
Print
Previous articleTennessee Wildlife Resources Agency releases July 4th Weekend Boating Report
Next articleClarksville Police Department warns Public of Phone Scams