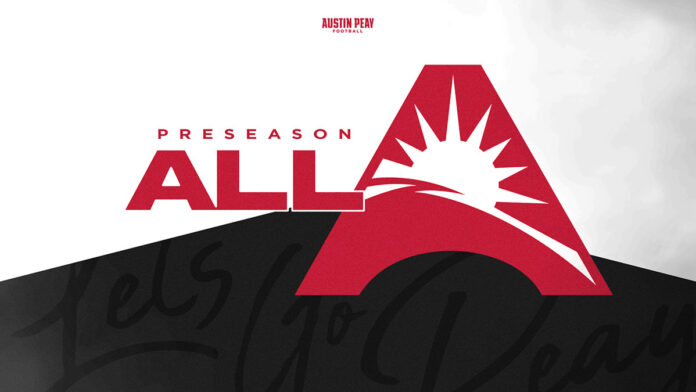 Atlanta, GA – Austin Peay State University (APSU) head football coach Scotty Walden‘s motto since taking over in December 2020 has been “Chase the Lion,” and the Governors will look forward to doing that after Friday’s ASUN Conference Media Day at the Omni Hotel.

Meanwhile, the league’s coaches placed Kennesaw State as favorites for the first ASUN Conference Football title, with the Owls receiving four first-place votes and 34 points. The league’s coaches picked Eastern Kentucky and Central Arkansas to finish tied for second place with 25 points each, and UCA picked up one of the other two first-place votes.

Jacksonville State was voted to finish fourth, followed by the Governors, who received the other first-place vote available. Despite gathering a league-best seven preseason selections, the league’s coaches picked North Alabama to finish sixth.

McCray, a Tallahassee, Florida product, leads an offensive unit that returns three starters from last season’s final game – all wide receivers. He led that group with 53 receptions for 882 yards and eight touchdowns en route to HERO Sports Freshman All-America honors. McCray saved his best performance as a freshman for the 2021 finale, amassing 237 receiving yards and a record-tying four touchdown receptions against Tennessee Tech.

Simmons, who hails from Ashland, Alabama, somehow flew under the radar in his first season at Austin Peay. Usually, a four-interception campaign and 50 tackles – both second on the team – from someone playing in the secondary would garner plenty of attention. But such was the depth and talent of the Govs’ defense a year ago that Simmons went without postseason recognition. However, the redshirt junior will be considered to lead a defensive unit that recorded 26 takeaways, including 19 interceptions last season.


As freshman campaigns go, Trujillo could not have done much better. He tied the APSU record with 14 field goals made, and his 77.8 percent field-goal conversion rate set the Governors’ record. The Flowery Branch, Georgia product was responsible for a team-leading 78 points in his rookie year. Trujillo will lead a special teams group that returns all its starters for the 2022 campaign.

The Governors open camp next week in preparation for their “Week 0” season opener at Western Kentucky, on August 27th. Fans can get their first look at the 2022 Governors during Govs Fest, Saturday, July 30th, at Fortera Stadium.

The Governors’ three road ASUN Conference outings take them to Central Arkansas, on October 1st, followed by North Alabama, on November 5th, and then to preseason-favorite Kennesaw State, on November 12th.


Season tickets for the upcoming 2022 schedule are available online at LetsGoPeay.com/buytickets or by calling the athletics ticket office at 931.221.PEAY. Season ticket holder benefits for the upcoming season include memorabilia fashioned from the turf of Fortera Stadium, on which APSU clinched the 2019 Ohio Valley Conference Championship. Exclusive season-ticket holder events include a ticket pick-up party and early access to the 2022 fan fest.

In addition, season ticket holders will have the opportunity to purchase a ticket to the regular-season ending game at Alabama as the Governors make their first-ever trip to Bryant-Denny Stadium. Season-ticket holders also receive priority access to Austin Peay State University and Nashville Predators events. APSU athletics will announce additional season-ticket benefits throughout the 2022-23 season.