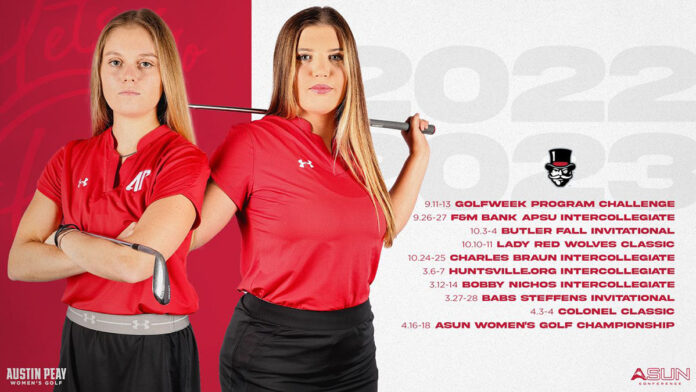 “We are looking forward to going to some new places as well as competing at a few tournaments that we had success at in the past,” said Combs. “Last year was great for us, but we also know that we need to keep our foot on the gas and keep moving forward.”

Combs tees off her fourth season at the helm when the Governors compete in the Golfweek Program Challenge, September 11th-13th, at the Caledonia Golf & Fish Club in Pawleys Island, South Carolina. The Govs opened the 2018-19 season at the same event, with now-graduate students Taylor Dedmen and Shelby Darnell pacing the team with 19th and 40th-place finishes, respectively, in their first collegiate events.

Austin Peay State University returns home to host the 22nd F&M Bank APSU Intercollegiate, September 26th-27th, at the Clarksville Country Club. The APSU Govs finished fourth at their tournament last season and have not won the tournament since 2015 when Combs – then Jessica Cathey – won the individual title and led her team to a six-shot victory over Lipscomb.

The Governors then look to defend their title at the Butler Fall Invitational, October 3rd-4th, at the Highland Golf & Country Club in Indianapolis, Indiana. The APSU Govs won the event by two strokes a season ago, picking up the first career tournament win for Combs and the best tournament finish for Ohio Valley Conference Freshman of the Year Erica Scutt, who shot 69 in the first and third rounds to finish in second place with a score of 210.

To open the spring season, the Governors compete in Samford’s Huntsville.org Intercollegiate, March 6th-7th, at the Robert Trent Jones (RTJ) Golf Trail at Hampton Cove Highlands Course in Owens Cross Roads, Alabama. Then the Govs return to an event they have not played since 2021 when they travel to Tennessee Tech’s Bobby Nichols Intercollegiate at Sevierville Golf Club – Highland Couse in Sevierville, Tennessee.


Austin Peay State University wraps up the regular season at a pair of ASUN Conference member’s events when it plays in Stetson’s Babs Steffens Invitational, March 27th-28th, at the DeBary Golf & Country Club in DeBary, Florida, and Eastern Kentucky’s Colonel Classic, April 3rd-4th, at The University Club at Arlington in Richmond, Kentucky.