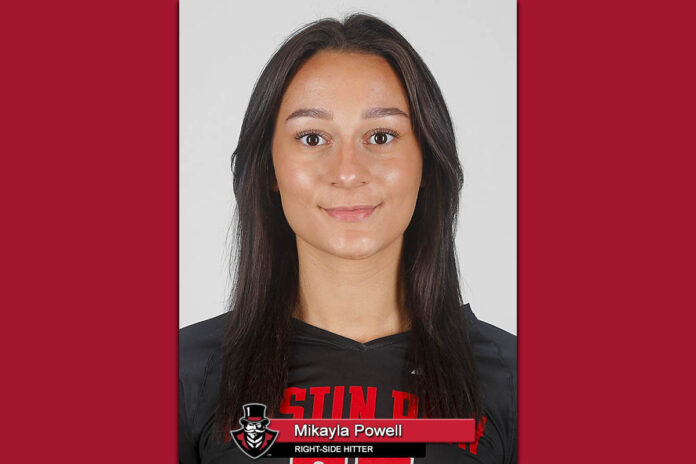 Powell, of Raymore, Missouri, averaged 4.90 kills per set and posted a .518 attack percentage as Austin Peay won all three matches of its Stacheville Challenge, last weekend. She also finished with five blocks and seven digs in the weekend’s action.

She opened the weekend with a career-high 23 kills against North Dakota State. It was the third consecutive weekend Powell set her career-high and her third 20-kill performance this season.

After that resounding opening, Powell followed with a 14-kill effort against East Tennessee that saw her record a .684 attack percentage, with one attack error on 19 attempts. That .684 mark was the fifth best in program history and is currently the 22nd best mark among Division I hitters this season. Powell wrapped up her weekend with 12 kills against UT Martin as the Govs clinched the tournament title.

Powell now ranks fourth among all ASUN Conference hitters in total kills (152), fifth in kills per set (3.45), and seventh in hitting percentage (.349) after four weeks of the 2022 campaign.

Austin Peay State University, which has won five of its last six matches, prepares for its first ASUN Conference action this weekend as it makes the league’s Kentucky swing. The Govs face Bellarmine in a 5:00pm CT, Friday match before taking the court at 1:00pm CT, Saturday at Eastern Kentucky.