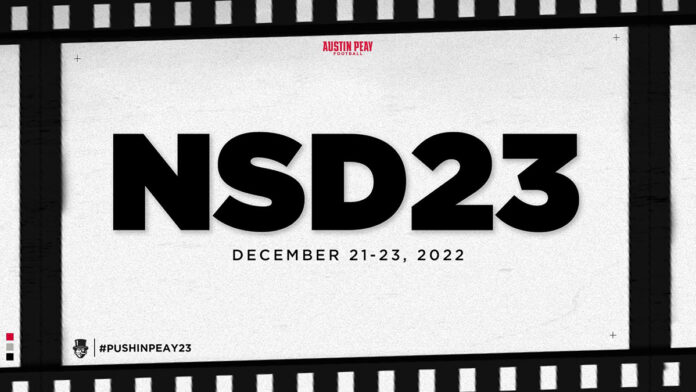 Austin Peay State University’s offensive line unit will get an infusion in in-state prep talent, with Leo Gonzalez (Lenoir City) and Ty Williams (Greeneville) bringing always-needed size to the offensive front. Also staying in the Volunteer State, linebacker Garrett Hawkins (Sevierville) and defensive lineman Jaden McKinney (Collierville) will help the Governors reload on the defensive side of the ball.


Hawkins wrapped up his prep career as the all-time leading tackler at Sevier County and McKinney’s 0.8467 composite score on 247Sports.com makes him the second highest-rated recruit in program history. Linebacker Frank Caldwell III (Atlanta, Georgia) and defensive lineman Kyan Miller (Lexington, Kentucky) also join what was the best defense in the ASUN Conference in 2022 and are each expected to make an immediate impact on the front seven.

Looking to the junior college ranks for a pair of playmaking wide receivers, the APSU Governors added Jones County’s Ashton Nickelberry (Brandon, Mississippi) and Garden City’s MJ Singleton (Lubbock, Texas). Nickelberry ranked seventh in the NJCAA with seven touchdown catches in 2022 and Singleton’s four touchdown grabs were the 28th-best mark in the NJCAA.

Gonzalez and Singleton will join the Governors for the spring semester and be eligible to participate in spring practice as early enrollees. The December signing period continues through Friday. Walden and the Austin Peay State University coaching staff then turn their attention toward the February signing period, which opens February 1st.