In the beginning there was Errol Flynn. Then Tyrone Power in The Black Swan. And always, a fiesty, pretty woman. A generation ago. Our next swashbucklers were intergalatic — the light saber play between Darth Vader and Luke Skywalker. Father and son. With pretty woman Princess Lea in between.

Today Johnny Deep swooshes and swaggers (more swoosh than swagger) across the big screen in Pirates of the Caribbean III: At World’s End, another theme-park-ride swashbuckler that is better than Pirates II, but a long way from the charm and manic humor and first run surprises of the original film.

In the audience on opening night (5/24), fans decked out in Sparrow regalia were at least as amusing and swaggering as the on-screen original, and seemed to be having as much fun as Depp & Co did making this movie in the Bahamas.

Depp reprises his eccentric (and now deceased) Capt. Jack Sparrow, this time in the underworld of Davy Jones Locker, only Jones is off negotiating big business in the real world with the East India Trading Company, who want to put the pirates out of business.

It’s a manic ride, peopled with Keira Knightly’s Elizabeth, Orlando Bloom’s Will Turner, and Geoffrey Rush as the snarling Capt. Barbossa, Chow-Yung-Fat as the pirate war lord with a soft (if lusting) spot for Elizabeth, and a host of supporting players including a minimally used rocker Keith Richards as Sparrow’s father (wish they’d done more with that, and maybe they will in #4, and yes, I think there will be a #4. Maybe more). Other dads make their appearances: Elizabeth watches in horror as her father sails into the hereafter in a stream of bodies floating in the waves; Will hopes to free his father from an existence as part of the Flying Dutchman. 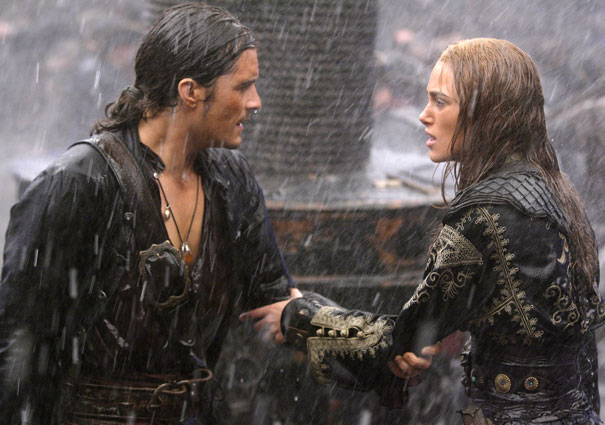 (Photo: Will and Elizabeth in the midst of battle)

Sparrow and company either romp or blast their way through a dozen mutinies, a host of double dealings, all the while moving in tandem with other star of the show: special effects. The Shanghai style port sets is a fascinating tour of shanties, pubs, ships, bridges, lighting, shadows, heroes, villains and monsters. A landlocked ship carried across the desert on the shells of a million crabs is eye-popping. A spectacular ship-eating maelstrom plays out against a magnificent musical score and the ice-crusted entry to the edge of the world is stunning.

Amid all this is the ongoing romance in the old school of secrets held too closely, misunderstandings threatening to part the lovers, and the age-old question of will they or won’t they ever marry?

Pirates is too many things pirated from too many other things, though that may be the key to its charm: it somehow seems familiar. A close looks reveals some of its inspirations: the Amazonian Calypso hails from “Attack of the 50-Foot Woman” turf, the swordplay and music screams Errol Flynn/Tyrone Power, and Sparrow’s multiple self-images and artistic psychotic breaks scream Salvador Dali and shades of fragmented Picasso imagery. 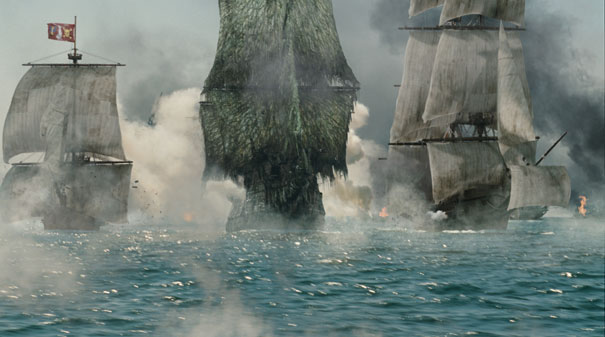 Double-dealing and backstabbing abound, the monsters originating from the first films’ “here there be monsters” line get more and more grissly, and any semblance of plot is due to luck. Davy Jone’s wriggling octopus-face is tamed compared to some of the creatures inhabiting this netherworld.

As a critic, I can tear the film apart (as most mainstream critics have already done), or at least break it down to its component parts: some better, some worse. But the fact is, as a movie buff and sci-fi fan of many years standing, Pirates is now a guilty pleasure of my own. I’ve made Pirate costumes for many members of my family. If a Pirates IV emerges, I may just make my own costumes this time.

Trying to take it seriously is just too much work. No movie has as convoluted a plot as this; it reaches a point where you just have to leave the details behind and simply sit back and enjoy the ride. At 168 minutes, it’s a heck of ride. And a word to the wise: just because the credits roll doesn’t mean the film is over.