Redacted and In the Valley of Elah.

Two tough films. Maybe a tough sell. But North American filmmakers are tackling heavy issues involving Iraq and Afghanistan, and these two films, premiering at the Venice Film Festival this weekend, are overwhelming viewers with grim realities drawn from headlines and guaranteed to spark controversy when released in the USA. In all, eight films on Iraq by American filmmakers are due out in the next six months; whether or when they will get screen time in Clarksville remains to be seen.

Master filmmaker Brian De Palma’s Redacted, a film about the rape of a 14-year-old Iraqi girl and the 2006 murder of her family by a U.S. soldier reportedly “stunned” audiences with blatant imagery and almost inconceivable grief and horror. It is based on a true story of Abeer Qazim Hazma al-Jabani in a town south of Baghdad, who was killed and burned by U.S. troops. Patrick Carroll (pictured, left) plays the character Reno Flake in Redacted.

This is one of the most graphic and repugnant stories to emerge from Iraq since the invasion four years ago. Five soldiers were charged and four convicted of this crime, each of the latter given sentences of as much as 110 years.

DePalma blurs the line between reality and fiction, using a graphic news story as the foundation for this screenplay. In 1989, DePalma gave us another film, Casualties of War, based on incidents in Vietnam, and openly admits that this new film draws on much of the information floating out on the internet. It’s brutal message, compiled from actual journals, videos and even You Tube footage, and is a powerful anti-war statement DePalma hopes will mobilize the average American to think long and hard about the Iraq conflict and a resolution that will that end it and bring our troops home.

In an ABC News interview, DePalma discussed how the horrors of the Vietnam War was delivered into our living rooms on the nightly news, body bags, scrolling body counts at the bottom of the TV screen — all laid out daily for public consumption. With Iraq, it’s different, he said, noting that reports are whitewashed, watered down or edited to comply with the image officials want [the public] to have rather than the reality of it. With corporately controlled media and the sanitizing of war news, DePalma turned to personal accounts, internet reports and graphics and other sources in the making of this film. His struggle to find information, his search for fact and truth, is how the named Redacted came about, and why the film is a fictionalized account of a true story.

The closing scene, according to reports, is a segment of actual photos of Iraqi war dead, with some features blacked out or ‘redacted’ for legal reasons, just as the news we are spoon fed is selectively filtered. Redacted will open in the USA in December. 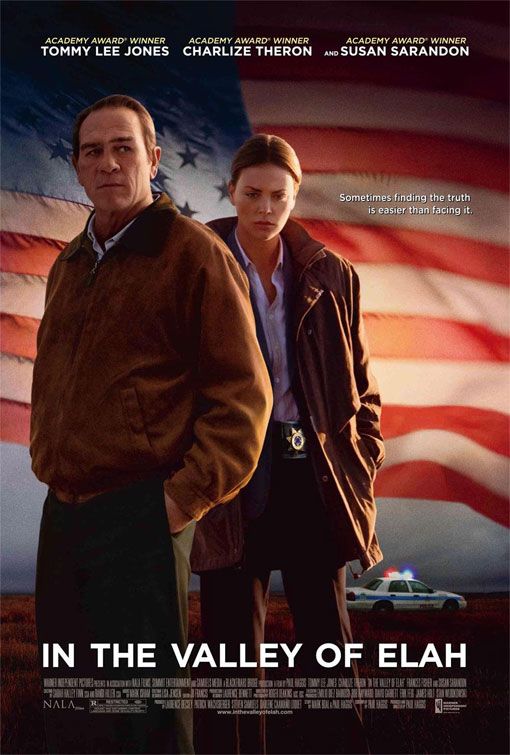 Paul Haggis’ In the Valley of Elah (coming to USA screens this fall) was made with initial support from actor/director Clint Eastwood, also addresses the brutality of war, a violence that many soldiers came home from combat.

Tommy Lee Jones plays Hank Deerfield, a Vietnam vet and father who begins to investigate the murder of his son, who has just returned from Iraq. Like Redacted, this film is also ripped from the headlines, based on the killing of a soldier by two other soldiers near his base. In the real life case, both murderers were found, tried and convicted.

As the film unfolds before us in the aftermath of a tour of duty, we watch the father observes bits and pieces of the war through a fuzzy cell phone picture, and they are not necessarily images put out by the administration for public consumption. Susan Sarandon and Charlize Theron co-star.

Coming soon (if not already here) are the other offering set in or related to Iraq, Afghanistan and both service and post-deployment issues. :

So keep your eyes open and let your finger track the movie listings; these films will be playing soon across America.