While America Sleeps: A cautionary tale of books, baggage, bureaucracy

While America Sleeps is “an occasional column” and commentary on the state of Civil Liberties in America.

While America sleeps in the illusion of freedoms guaranteed by the Bill of Rights and the United States Constitution, America’s gatekeepers (in the form of the the FBI, CIA, Homeland Security, Oval Office and even our Congress, all of whom have failed miserably at controlling illegal immigration in the USA) are hard at work finding new, creative, under-the-radar ways to press down ever harder that growing thumb of “security” on the average American citizen.

Too many Americans, asleep at the wheel in their sheltered cocoons of ambivalence, inattentiveness and a faulty assumption that government is always working in their best interest, keep hitting that snooze button as, one by one, their rights are revoked and their private lives invaded by bureaucratic snooping.

Wake up, America. Time to smell the coffee. It’s getting bitter.

As I browsed the web these past few weeks, cruising for news that comes from anywhere, everywhere but Fox and its growing ilk, or corporately directed newscasts, I’ve stumbled across quite a few interesting but troubling stories.

The first story that jumps to mind concerns travel beyond U.S. borders, and the apparent governmental monitoring of all the things we bring aboard a plane: the titles of the book(s) we carry, the kinds of medications we pack, our destinations and frequency of travel, who we travel with and how often we share the same flights (we don’t have to be seat mates, just on the same flights). Snoopy. Spooky.

This data, information we aren’t even aware is being collected, is, according to reports stockpiled for FIFTEEN YEARS by some obscure governmental process kept out of the public eye. Just collecting and collating that data seems to ensure lifetime job security for quite a few people.

The Automated Targetting System (ATS, another of the government’s favored three-letter acronyms) has its eye on you, on your cruise plans, your honeymoon in Venice, your theater trip to London, your trip-of-a-lifetime African safari, that jaunt across the border to Montreal or Vancouver, or that otherwise simple business trip to China or France.

In a North Carolina News Observer article, U.S. Monitors Americans’ Travel (9/22/07), under the guise of helping “border officials distinguish potential terrorists from innocent people,” the government is calculating the finite details of your travels almost to the quality and quantity of the air you breathe en route. ATS has been in place for more than a decade, but in 2002 the monitored skyrocketed. They weren’t very effective in 2001.

In the weeks after Sept. 11, no one in Dallas, Texas, even opened my luggage at customs or bothered to read my customs declaration. Peruvian agents took my friend’s tiny bottle of Sugar Cane rum made in the Amazon jungle before we ever boarded a much delayed flight home, and Peruvian and American agents on either end of our flight both missed the 24 inch long, boldly painted, intricately carved blow gun and the kapok tipped arrows (which look like oversized Q-tips) I bought from a Yagua tribesman somewhere in the jungle. My friend’s was even bigger, brighter and bolder. They never looked at hers either. Or the tribal masks we brought home with us. Our carefully packed souvenirs traveled unencumbered and unquestioned for 6,000 miles. We, the overweight, out-of-breath, exhilarated, and exhausted probably looked too “American tourist” to be of concern. Uh-oh. profiling.

But in fact, the time it takes to monitor the members of a senior center’s art tour bound for Holland would be better spent focusing on other security triggers. Unless there are deeper, darker motives for setting this type of surveillance in place, motives that might include an internal expansion of the program. That dovetails neatly with the ongoing assault on civil liberties.

“Civil liberties advocates say the information preserved raises alarms about the government’s ability to intrude into the lives of ordinary people. The millions of travelers whose records are kept are generally unaware of what their records say, and the government has not created an effective mechanism for reviewing the data and correcting errors, activists said.”

ATS administrators now confronted with public ire and activist scrutiny are backpedaling the details of who, what and where they are directing their observations, which means only that after five years of information gathering their dirty little secrets are under a public microscope now. Does that mean the same surveillance is being applied to domestic travel and we just don’t know the depth of that monitoring yet?

Funny, but I didn’t think my copy of Dan Brown’s The DaVinci Code, Plato’s The Myth of the Caves, the notes in my journal on the refurbished “architecture as art” of bus stations in New England, or my manuscript on Dementia and caregiving merited that kind of scrutiny.

Are they Zeroxing my letters too? Photocopying my Bad Monkey Bush pin or my precious bright blue Don’t Buy War Toys button? My Friend of Dunbar Cave (ohmygod she might be an Al Gore earth-centric environmentalist!) button? Are they counting the number of high blood pressure pills in my cosmetic bag? Checking the color of my lipstick? The brand of shampoo I use? The chemical content of my 3 oz. ‘For Color Treated Hair’ conditioner? Maybe they need to do a strand test to make sure my Hibiscus Revlon Hydrience hair dye doesn’t pose a toxic threat at 35,000 feet? Somehow, I didn’t think the battered, worn-out snow proof baggage I use on my semi-annual commute to a northern college for a labor-intensive week of writing workshops was all that noteworthy.

Oh, wait! I do go to a very progressive, non-traditional, liberal, free-thinking, outside-the-box school near the permeable Canadian border. The one was anti-war in the 60s, gay pride conscious in the 70s, environmentally conscious in the 80s, pro-civil union in the 90s and vegetarian years before it was fashionable.

Maybe my enrollment there makes me, with my ‘slightly the worse for wear’ 57-year-old body, asthma, allergies, bad back, and hypertension a dangerous person; after all, my brain still works and I exercise it regularly by reading, asking questions and paying attention. Maybe, though, I won’t be allowed to fly because I have the ability to get to my gate on time and read the seat numbers without assistance.

On a deeper, more serious level, this kind of governmental scrutiny is akin to intellectual rape, a violation of personal privacy, an intrusion taken to the extreme that should not be tolerated by any of us. And yes, I am taking it personally. So should all of you.

There’s more, though. I all but laughed at the lunatic concept presented in this policy that says two people traveling together once is coincidence; two people traveling on the same flight twice constitutes a “relationship” and such relationships raise questions. Okay, commuters. Each needs a separate flight between JFK and DC, or Boston and New York, or San Francisco to LA for those Monday through Friday commutes to escape the “pairing.” Heaven forbid you should be on the same flight with the same group of people more than once. Husbands and wives — start counting the vacations you take together. You seniors from the local COA running off to Vegas and the slot machines a couple of times a year — you are a conspiracy in the making. You may end up on a no fly list. “What plays in Vegas” may stay in Vegas, but how you get there could become a matter of public record for Homeland Security.

Officials quoted in these stories say that such tracking led in part to the connections of the 9-11 terrorists. Threads in a global terrorist conspiracy. But billions of records are being collected, uploaded and filed into semi-obscurity in a governmental cyber warehouse of infinite proportions. 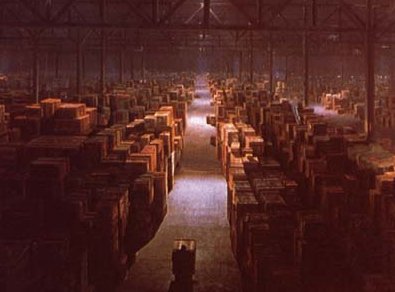 Remember the visual punch (photo, above) of the first Indiana Jones movie, Raiders of the Lost Ark? The most powerful religious artifact in the world, packed in a wooden crate, rolling down a city of floor to ceiling crates in a governmental warehouse. The new ATS warehouse is configured in cyberspace, but our records are all alive and well there. Somewhere.
The majority of these records reflect ordinary people, with ordinary lives: your daughter and her friends flying off to college, grandma’s winter in Florida, dad’s monthly meetings in Chicago, a young couple’s romantic honeymoon in Venice, the annual family trip to Disneyland. The majority of these records reflect ordinary people, whose expectations as defined by the Bill of Rights are being undermined by a growing number of invasive, intrusive forays into their personal lives.

Yes, there is a pattern and profile to terrorism, but it is not in the luggage, the handbags, the briefcases, the journals, or the books of the average American traveler.