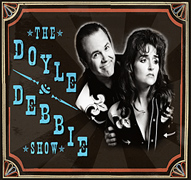 Do you love country music? Me neither.

From the Country Music capitol of Nashville, Tennessee, comes the Doyle and Debbie show (Live Theatre) with song favorites such as Whine Whine Twang Twang, When You’re Screwing Other Women (Think of Me), Stock Car Love, Barefoot and Pregnant, I Ain’t No Homo (But Man You Sure Look Good to Me), Daddy’s Hair and so much more.

Performed by Bruce Arntson and Jenny Littleton, who is a native of Clarksville, the show has been an overwhelming success. That success comes to late night television tonight via the Conan O’Brien show (10:30 CST). The show precedes their appearance the next night at the midtown Manhattan B. B. King’s.

“Littleton is talented as usual, using her coyly flexible voice to solid comic effect even when she’s singing things straight-ahead. Arntson is often flat-out brilliant, inhabiting his frighteningly lifelike character with a passion and intensity worthy of the country entertainers he lampoons. His tongue-twisting delivery of the show’s closing number is masterful.” —Nashville Scene

We saw the show at a “held over ” performance in Nashville over a year ago, and it’s still held over. As the show opens, we watch Doyle and Debbie get ready backstage; they don’t look at each other or speak one word to each other before popping on stage smiling and acting like a happy duo. Had we not known this show is a parody, we would have been in shock over the words. When we remembered that they are, after all, just acting (and they are just so good at it), we laughed our heads off at the absurdity of it all.

Debbie sings a song called For the Children, when backstage you hear her tell her kids to behave in the car while they wait for her to do the show. Doyle tells the audience that this is his third “Debbie” and often he refers back to one of the other “Debbies”.

With permission here are the words to the song ABC’s of Love. Hear their music and find all the words on their web site. http://www.doyleanddebbie.com/