Stacey Campfield (R, Knoxville), a self-described Christian and one of the more colorful members of the Tennessee House of Representatives, recently introduced what many have viewed as an extremely confusing bill regarding that which he most eloquently describes in his blog as “what should not be taught in our schools.” This bill, HB2997, requests the amendment of the Tennessee State Code to prohibit “any instruction or materials discussing sexual orientation other than heterosexuality” in elementary and middle schools. 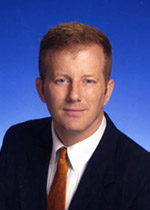 Campfield (at right), during his short tenure in the House, has gained a reputation for introducing controversial, if not peculiar, legislation that many view as antagonistic and bizarre. His past history of failed attempts to limit academic freedom are also well known. In 2005, he introduced HB0432, which was an attempt to limit instructional content by specifically denying classroom teachers the opportunity to express their own personal beliefs with regards to the material that they present. At the same time, Campfield made it clear that he felt as though students should have the right to “speak without fear of hurting their grades.” Many view this as an attempt to legitimatize the rights of free speech for students, but to limit them for classroom instructors.

Last year, Campfield has introduced legislation calling for the removal of the sales tax on food, replacing the lost revenue to the state with additional taxes on pornography. As a Christian, he justifies the potential for financial gain through the taxation of an industry that many of his fellow Christians would call immoral, by defining it as a “luxury item.” Many viewed this legislation as an attempt to give good reason for the sale of pornographic materials and the peddling of human flesh through a motive to fill the State’s coffers.

His most recent attempt to pass a enact HB2997 has, according to many in the media, left equality leaders scratching their heads. Here is the full wording of the bill:

BE IT ENACTED BY THE GENERAL ASSEMBLY OF THE STATE OF TENNESSEE:
SECTION 1. Tennessee Code Annotated, Section 49-6-1005, is amended by adding the following as new subsection (c) and by relettering the existing subsection (c) accordingly:

(c) The general assembly recognizes the sensitivity of certain subjects that are best explained and discussed in the home. Human sexuality is an immensely complex subject with enormous societal, scientific, psychiatric and historical implications that are best understood by children with sufficient maturity to grasp such issues. Notwithstanding law to the contrary, no public elementary or middle school shall permit any instruction or materials discussing sexual orientation other than heterosexuality.

SECTION 2. This act shall take effect upon becoming a law, the public welfare requiring it.

In a manner consistent with his other attempts to pass legislation, Campfield expresses in his daily blog that certain segments of the public clearly misunderstand his motives: “Some people have tried to paint it as anti-gay. It is not.” In an attempt to justify his position, he seems to differentiate terminology into two categories: permissible and impermissible. He clearly limits “the topics of sexual orientation” as “topics best left to parents and guardians,” to the exclusion of schools, community leaders and the clergy. He justifies his exclusion of discussion of orientations other than heterosexuality as a need to “concentrate on the basics,” and to teach heterosexuality as the basis for the biology of sexual reproduction. He also states that:

“Without allowing reference to heterosexuality then I am sure some group would sue the state [sic] and say that we can no longer teach “Jack and Jill went up the hill” or how George and Martha Washington were husband and wife because they would say it promotes heterosexuality. You may laugh but these types of things are already happening [sic] in some states.”

This and many other statements regarding curricular innovation are on Mr. Campfield’s blog site.

The Tennessee Equality Project, a 501c4 organization incorporated in Tennessee for the specific purpose of advancing and protecting the rights of LGBT citizens, is presently attempting to fight the passage of HB2997.

The Tennessee Equality Project opposes the bill because it is not only “overly broad in scope,” but that it seems to be a “bill in search of a problem” as it does not demonstrate adequate evidence of problematic discussion of any sexuality in K-8 instruction. In other words, Campfield has not reasonably justified a need for amending the Tennessee State Code.

Sanders continues by stating that the bills “inhibit the free speech of communities, teachers and leaders,” which seems to be consistent with a good amount of the criticism levied against Campfield’s legislation. He notes that there are inconsistencies in these bills, and specifically that “they contradict their own reasoning by saying on the one hand that sexuality is complex and then seeking to reduce that complexity to heterosexuality on the other hand.”

Additionally, it is worthy of mention that Campfield himself seems to criticize his own logic in saying that teaching about sexual orientation is unnecessary, as it is complex, yet teaching about heterosexuality is necessary as a basis for instruction on sexual reproduction. Succinctly, according to Sanders, the bills “contradict the spirit of education, which requires open discussion of the various branches of knowledge in the search of truth.”

The Tennessee Equality Project plans to voice their opinions regarding this and other proposed legislation that would affect the Lesbian, Gay, Bisexual and Transgender communities at their annual Advancing Equality Day on the Hill on February 19, 2008. If you are interested in participating, or if you would like further information regarding TEP, please contact Todd Hughes at .

The Tennessee Equality Project is a 501c4 organization incorporated in Tennessee. Gifts to TEP are not deductible for purposes of federal income tax.

Todd Hugheshttp://
I'm the Director of the Language Center at Vandebilt University. I'm also interested in GLBT issues, and serve as the Middle Tennessee Coordinator for the Tennessee Equality Project. I'm here to serve you in the Clarksville area!
RELATED ARTICLES
Politics