On Wednesday evening Clarksville Online took a first hand look at the clearing of Mericourt Park off Pageant Lane, where decades old trees have been cut down, an action that caught many city residents unaware. The action has triggered a mix of outrage and unanswered questions. Ward 10 City Councilor Bill Summers has responded to the issue of extensive tree-cutting at Mericourt Park via e-mail through the City Council’s email service. These are his comments on this controversial issue: 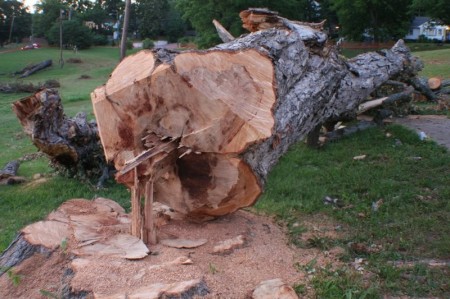 There has been interest about the new softball fields that are being constructed at Mericourt Park, which is located by Moore Elementary School. I believe I have some information and insight that I can share through years of direct experience with these softball fields and from being a member of the Parent Information Network (PIN). [Wednesday night] PIN, as usual, attended the school board meeting. The improvements at Mericourt Park were brought up, but some data and information was not mentioned and PIN asked for additional information. PIN has received this additional information and sent it out through its email network. [I am sending that same info through my council network. 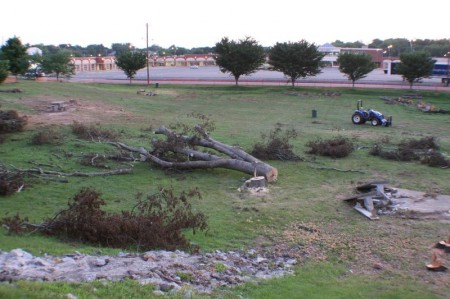 First, the ball fields that are around Moore School (Mericourt) and Barksdale School (boys’ baseball fields) are on property owned by the school system. There is a user agreement lease between the city and school system to allow these fields to be used by the city for ballparks.

Second, Moore-Design-Services had an approved demolition plan, dated January 2008, for the field improvements at Mericourt Park. The demolition plan identified the trees that would need to be removed to build the fields needed. Personal observation of one large tree that has been cut down brought to light that its core was starting to rot, even though the tree looked okay from the outside. That same tree had a bad habit of dropping limbs that had died for no apparent reason. The rotting may have been that reason.

Third, as I mentioned, I have direct experience with these ball fields. For a number of years, my daughters played in the Clarksville National Girls Softball League that use the Mericourt fields and I was also an assistant and head couch of several teams. Of the four fields currently there, two are on the lower level where the current renovations are taking place. These lower fields have always been a problem. The field closer to the intersection of Madison Street and Pageant Lane had serious drainage problems. Engineers reported that a recent storm dropped about 1.5 inches of rain and about 3 million gallons of water collected on the lower fields. I have personally seen storms that blew in during games and watch over a foot of rain collect on top of these fields. Such rainfall destroys the infield, and it takes parents and coaches hours to try and drain water, fill holes that develop, shovel back lost dirt and clean out trash, limbs and other debris. The engineers have discovered that the drainage does not conform to codes for storm water runoff.

Fourth, the other lower level field was a ball field in name only. It was too small and locked in by the field’s level and trees. Only the youngest teams used this field. It had been a long-term goal to improve these fields to provide for more game play for the hundreds of girls that play in the league. 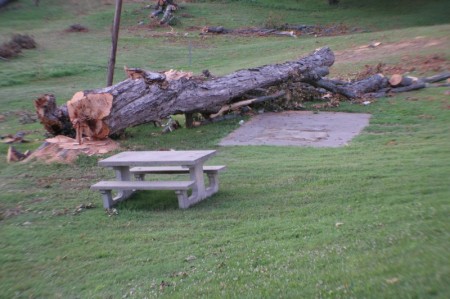 Fifth, due to constant city budget and funding limitations over the years, the league used its own financial resources and the labor of volunteers, donations of businesses, and the abilities of coaches and parents to improve the condition and facilities on these fields. The current proposed improvements and additions to the lower complex are being done through donations and volunteer time with almost all costs being absorbed by the league. The improvement plan will help prepare an area for an additional playground for Moore Magnet School. (The PTO is raising the funds for the equipment. This ground preparation will save the school many dollars in the total cost of the playground). The new field design provides better safety for the children playing softball as well as the vehicular traffic on Pageant Lane. (Better positioning of the fields and safety fences will prevent children and/or adults from chasing foul balls across the street.) The improvement plan provides an excellent outdoor classroom for the students at Moore Magnet and calls for the planting of new trees and other beautification work. The improvements are also needed to make the fields compliant with the Americans with Disabilities Act.
PIN has requested a copy of the ballpark layout that was presented at the school board meeting. PIN will provide a copy on its website and I will send a copy through my council email system.

The main goal to remember is that these are ball fields are for the use of our children. Hundreds of girls play on these fields and the expansion and improvements will enable hundreds more to participate each year. Tree cutting has been kept to a minimum to provide for the improvements needed. It also appears that at least one of the large trees was not as in good a shape as some would have assumed.