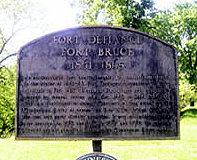 The City of Clarksville will break ground on an interpretive center planned for Fort Defiance Park on Tuesday, December 9 at 3 p.m.

Fort Defiance Park, located at 120 A Street in New Providence, is the site of a Civil War-era fort used by the and later occupied by the Union Army. Today the earthworks (mounds) of the original fort are all that remain. The new interpretive center will illustrate through images and artifacts the story of Fort Defiance and the significance of the fort’s position as a controlling point on the Cumberland River.