Every Tennessee school child learns early on that our state has been blessed with heros throughout its history. Davy Crockett at the Alamo, Alvin York in the trenches of World War I Europe – we continue to revere the honorable people who sprang from our hills and hollows with the in-borne courage to do the next right thing when they were called on to do so. There are three other heros – two long-gone now and one who is still very much alive – who helped expand our franchise and, in the process, helped save our democracy. The two deceased heros were Harry Burn and Ben West. The third hero, the one who still walks among us, is Senator Tim Burchett of Knoxville.

Harry Burn was a first-term Republican state representative from McMinn county, the youngest Tennessee state legislator serving in 1920 when women’s suffrage hung in the balance in our state. Back then, only one state was needed to ratify the Nineteenth amendment to the US Constitution, an amendment that would give women the right to vote. Like many legislators at the time, Representative Burn was under extreme pressure from sexist politicians back home to oppose the amendment, to keep women “in their place”. Some even believed that Rep. Burn was a safe bet to vote against suffrage, since he wore a red rose on his lapel, a color then (and now) that represented exclusion and disenfranchisement. But as the pivotal vote approached,

the opponents of inclusion did not know that Representative Burn carried in his coat pocket a letter from his widowed mother urging him to vote for ratification. When his name was called, Harry Burn voted “yes”, the single deciding vote that ratified – for our entire nation – the Nineteenth Amendment.

Ben West was the Mayor of Nashville in 1960, when Black college students began a series of lunch-counter sit-ins in segregated department stores that were just among the many pillars of the Jim Crow South. For months, those students had been arrested and hauled off to jail. As a result, the Black community had boycotted Nashville stores and Whites had also stayed away, crippling the downtown Nashville economy. Tensions had risen to the point where the home and church of Reverend Alexander Looby, a civil rights leader, had been bombed, sending him to the hospital. Responding to that violence, thousands of Nashvillians marched to City Hall where Mayor West met them. One young Fisk student, Diane Nash, spoke quietly that day to Mayor West and pleaded with him to use the prestige of his office to end racial segregation. Mayor West’s response was simple and direct: “Yes, young lady, I will do that.” Years later, Ben West said that, at that moment, he had said the only thing that any moral person could say – that he had answered as a God-fearing man, and not as a politician. The next day, the Nashville Banner’s headline said it all “INTEGRATE COUNTERS – MAYOR”. Within a month, all Nashville lunch-counters were integrated and, with that positive role-model in the heart of the South, Jim Crow’s racist days were numbered. 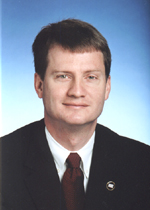 That brings us to Senator Tim Burchett, a Knoxville Republican and the bravest and most patriotic man I know in our fair state today. For the past three years, Tennessee voters have been working hard to correct a serious error in how we conduct our elections here. In 2006, Tennessee wasted over $30 million in federal funds to purchase touch-screen voting machines (also called Direct Record Electronic machines, or DREs), voting machines that are slow, expensive and – worst of all – incapable of being audited or recounted. These machines have been implicated in a plethora of election fraud incidents across our country, and state after state has made the decision to ban these machines in favor of paper ballots. Tennessee was one of those states when we passed the TN Voter Confidence Act last year on a 92-3 vote in our House and a 32-0 vote in our Senate to replace those non-verifiable machines with paper ballots by the 2010 elections.

But when the Republican Party unexpectedly took control of our state legislature in 2008, one of the first things their leaders announced was that they intended to weaken, delay or repeal the Voter Confidence Act. For the past five months, a small band of Tennessee voters has traveled daily to our legislature and has witnessed a highly partisan and divided legislature, with most Democrats in favor of implementing the Voter Confidence Act as intended and most Republicans in favor of our continuing to vote on insecure and untrustworthy DREs. Since Republicans now control our General Assembly (for the first time since Reconstruction), we knew that the prospects for protecting our franchise were in peril.

Yesterday evening, as our Senate debated long and hard about a bill to delay implementation of the Voter Confidence Act until 2012 and to gut the law’s election audit provisions, it was clear that the vote would be close and split along party lines. When the final vote was cast, the tally was 16-14 to delay democracy by postponing the implementation of the Voter Confidence Act until 2012. At first, we were crest-fallen, thinking that we had lost. But then one of us remembered that it takes 17 votes in the Senate for a law to pass, and with only 16 votes, the measure had failed. When we looked up at the vote board, we could see that all Democrats had voted to keep the Voter Confidence Act on-track for 2010 (except one, who had abstained) and all Republicans had voted to delay and weaken democracy. All of them, that is, except one. Senator Tim Burchett, a man who has been steadfast and vocal in his support for free, fair and verifiable elections for the past three years; and whose singular vote last night in opposition to the rest of his party allowed democracy to prevail in our state.

Thank you, Senator Burchett. Your intelligence, courage and sense of honor and fairness are what this country was built on, and what we must have in order for this nation to survive. Like Atticus Finch in “To Kill A Mockingbird”, your singular bravery has helped keep us free. And like the Black citizens who filled the courtroom gallery in that long-ago movie, I will, from this day forward, stand up when you enter a room. Because I will know that I am in the presence of a modern-day patriot, the latest in a long line of American heros who sprang from the hills of our Tennessee when they were needed to help keep our nation strong and safe — and free. Yesterday, you saved our democracy.

Bernie Ellis, Organizer
Gathering To Save Our Democracy

Bernie Ellis
Bernard "Bernie" H. Ellis, Jr., MA, MPH, is the principal researcher and founder of Bernard Ellis and Associates, Inc. Mr. Ellis is a consultant epidemiologist specializing in epidemiological research strategies to assess public health program development, delivery and effectiveness. Mr. Ellis is also a political and e-voting activist. He has devoted much of his professional life to helping others.
RELATED ARTICLES
Commentary