Bastogne Overwatch: No Slack for insurgents

Nuristan Province, Afghanistan – At a remote forward operating base in eastern Afghanistan, Task Force No Slack Soldiers were sitting in a tent waiting impatiently at 2:00am November 7th. To idle away the minutes, they passed around a thick-bound book of the 101st Airborne Division’s World War II feats, some hoping to become immortalized in a similar book years from now about Operation Enduring Freedom.

They were waiting for a call to head out. The call came and Soldiers from Company C, 2nd Battalion, 327th Infantry Regiment donned combat gear and ventured into the night to catch a helicopter to the top of a mountain deep within Taliban territory in the Shal Valley in eastern Afghanistan’s Nuristan Province.

Under the light of the stars, the 101st Airborne Soldiers conducted an air assault onto the mountain to provide security over-watch for a convoy of supplies on the road far below.

“Historically, the patrol has been ambushed along the route at multiple points,” explained U.S. Army Capt. Juan Garcia, company commander from New London, N.H. “The combat logistics patrol becomes the focus of enemy fire along the route, and if you stop one or two vehicles, the supplies can’t keep going up.”

The company was briefed beforehand it was going to be a relatively hostile area and that no Americans have been on that mountain before, added Garcia.

Once on the ground, the Soldiers quickly got to work building fighting positions out of the rocky hillside around them, unsure of what was next.

“This is going to be a sleeping hole for me tonight to keep me out of the wind and [provides] a little more protection for what comes my way,” said U.S. Army Pfc. Bobby Rey, an infantryman from Mobile, Ala., while digging a hole with an entrenching tool. “If they shoot rocket-propelled grenades or rounds at us, the rocks will stop them, hopefully.”

The sun slowly crested the eastern mountaintop overlooking their fighting positions, throwing an intense glare in their eyes.

“My biggest fear out here, especially in Afghanistan, is the difference between being successful and being a failure is one or two of your guys being killed,” said Garcia. “If you’re not successful, that means people are dying.”

After intense planning and leadership from the lowest level on up, the Soldiers braced themselves in the frigid morning light for what was going to be a long day. They were determined to be successful.

Then the firing started. 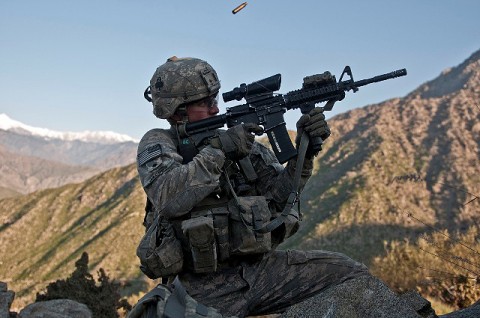 Soldiers quickly scrambled to get behind cover and call out the muzzle flashes from the enemy locations. Bullets whizzed overhead cracking the rocks and ground all around.

“I was fixing my fighting position when the first round came and hit the rock next to me and threw it off the side of the mountain. I just watched it drop down,” said U.S. Army Pfc. Dustin Feldhaus, a squad-designated marksman from Glendale, Ariz. “I really couldn’t see where anything was coming from. I got down and behind cover. A couple tree branches in front of me got knocked down from the rounds coming in.”

Automatic machine gun fire filled the air. The anticipation was gone, and their infantry experience and training kicked in.

“It’s a good adrenaline rush, I mean, that’s what I joined for,” said U.S. Army Spc. Nathan Allen, a team leader from Atlantic, Iowa. “You got to worry about all your guys and making sure they’re getting behind cover calling out if they see something and what they see.”

From the east, north and south, Taliban fighters were attacking the Soldiers with well-aimed shots, keeping them pinned down. 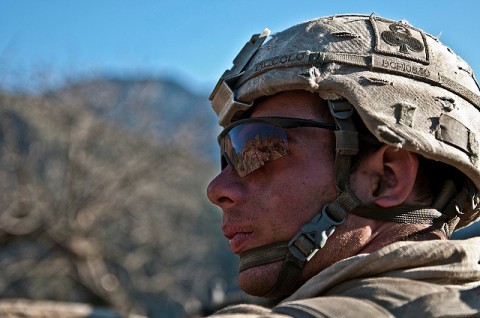 “Initially, I thought just my position was suppressed, just because the nature of the way the rounds were coming in,” said Garcia. “But as I started to move around and get better eyes on where they were shooting, I could see my entire element was taking heavy enemy fire … so I was worried about my guys taking casualties.”

Fighting back and continually communicating with each other, the Soldiers called for air support and heard the relief of AH-64 Apache helicopters on their way.

“When bullets get closer, they make different sounds,” explained Garcia. “When they’re very far away, they make a snap or a whiz. As they get closer, you can feel a crack or a pop, then you can feel the rocks hitting you … the positions we were in, most of the guys could hear the crack and the pop and have rounds hitting the rocks and equipment right there by you.”

The reality of their situation was getting worse with one of the Soldiers wounded. Garcia quickly rallied his troops and repositioned his Soldiers into fighting positions at better vantage points on the West side of the ridge.

Turning of the tide

“Vince Lombardi used to say, ‘It all comes down to blocking and tackling,’” said Garcia. “If you don’t block and tackle well, then you won’t win. And I think we did the basics well.”

In their new fighting positions, Soldiers could better see where the enemy fire was coming from and figured out how to suppress it with the help of air support. For the next eight hours, sporadic fire was exchanged. Then, as the sun disappeared behind the western mountains, the Soldiers perseverance began to pay off. 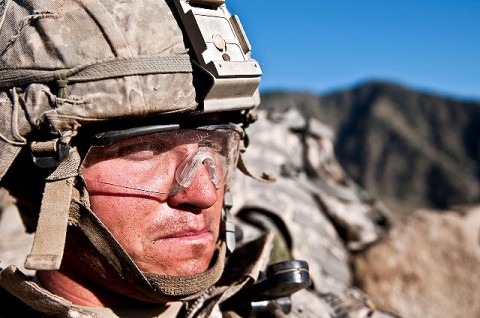 “We started to get inside the enemies’ minds and start[ed] to catch them with their pants down,” Garcia said. “Morale started going up and from the first day to the next day, morale was about one million times higher.”

The temperature dropped almost 30 degrees, but the Soldiers were safe inside their new positions. Under the cover of darkness, they fortified their positions, continually calling for artillery shells and bombing runs.

“It was really loud between the grenade rounds, shooting and exploding, the bombs being dropped, the machine gun fire going off next to my head.” said U.S. Army Spc. James Piccolo, an infantryman from Longview, Wash. “Rounds were being thrown at us, and we had to keep reloading and keep firing. In between doing that, I was looking for more people at the base of the hill.”

Confidant in their air support, the Soldiers called up enemy fighting positions for bombing runs throughout the bone-chilling night.

“They definitely dropped two bombs at the base of our hill, danger close,” added Piccolo. “It was welcomed, but it rocked us up here. I think they’re definitely wishing they stayed at home.”

The course of the battle shifted toward the more equipped, more professional and more tenacious Cougar Company troops throughout the next two days. Soldiers seldom walked around and everyone slept, ate and lived in their combat gear staying protected by their makeshift bunkers.

“I’ve got to thank my mom for buying me all those Legos and Lincoln Logs,” said a dirt-caked Allen. “It’s helping me build all these different sizes of rocks and boulders and filling them up with dirt to stop the bullets. It makes it a little better cover and makes it more comfortable at night sleeping knowing you got something around you that can stop shrapnel and bullets.”

Late on the third evening, a radio reported news of the convoy passing on the road below.

“I’m a driver whenever we’re in vehicles,” said Feldhaus. “I know that I wouldn’t want to be shot at, so it’s a good feeling helping these guys out … We’re doing what we’re supposed to be doing.”

With the enemy’s ability to maneuver taken away and intelligence reporting the enemy’s morale crushed, they were on the run.

The logistics convoy creeped through the valley without being attacked.

This was the first time that this particular convoy wasn’t disturbed by insurgents, said Garcia.

“I always take being selected for a mission as an honor. They always select a company for a reason to do things,” said Garcia. “It was more like a killer bee’s nest with red ants thrown on top of it … The heroic mentality in this group is incredible. I wouldn’t have made it if it wasn’t for these guys.”

As most of these young men’s civilian counterparts are worried about grades and upcoming tests, these Soldiers knew they had just passed one of their toughest exams.

“I think overall, it’s been a pretty good mission,” said Piccolo with dirt smeared across his lips. “We came up here and are doing what we’re supposed to be doing. The first day sucked. They had us suppressed pretty good, but since then, we’ve been pretty much kicking their ass.”

With whatever adrenaline the dirty, tired and hungry Soldiers had left, they mounted the helicopters. The mission was successful, everyone was coming home alive. As the UH-60 Black Hawks veered away from the mountaintop, the Soldiers looked down on a long string of lights far off in the distance. The logistics convoy pressed on, safely out of danger because of the dedicated 101st Airborne Soldiers content in their accomplishments. Just like the Soldiers in previous wars with pictures in hard-bound books.