Two in Custody After Home Invasion-Timothy Cox and Charles Yebuah

Clarksville, TN – On November 17th, 2010, around 7:17pm, Police received a call from a man who was hiding in a back room of an apartment at 500 Kraft Street after two men forced their way into the residence. The two men were unaware the man was in the back room calling Police.

After the two men, later identified as Charles Yebuah and Timothy Cox, forced their way into the apartment, they held the occupants at gunpoint and demanded money and cell phones from the victims. The robbers took two XBOX systems, 3 cell phones, cash, and three XBOX games and fled from the residence. Officers were on scene and had the building surrounded within three minutes. 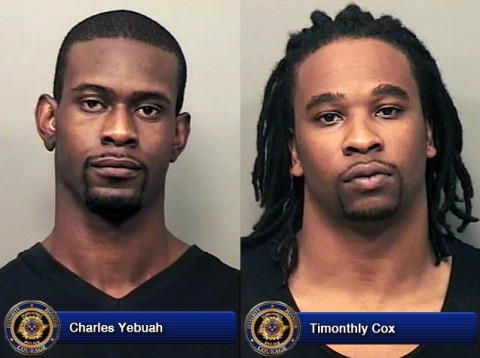 Officer Jason Hankins caught Yabuah in the breezeway of the apartment building before he was able to get away. Cox fled from the scene and called a friend to pick him up. The vehicle which COX was inside of was located and stopped by officers at Kraft and North Second Street. Additionally, Yebuah and Cox were also linked to drugs which were found during the course of the investigation.