Paktika Province, Afghanistan — Afghanistan’s minister of justice and U.S. leaders met with Paktika Province’s governor January 20th to review and assess the local prisons and gain an understanding of the province.

“On many of our visits we take the minister of justice and the head of the central prison directorate to go visit every governor to talk about rule of law, see their prisons, see their courts, see the (National Director of Security) detention facilities and see how we can support their rule of law, while we also address the issues caused by insurgents within the prisons,” Harward said.

Harward, Ghalib and the TF Currahee command team met with Samim during a peace shura with the elders of YahYa Khel District and took the opportunity to hear the concerns of the people.

“It was a discussion with the governor about issues the citizens have and what they need in Paktika,” said U.S. Army Col. Sean M. Jenkins, TF Currahee commander and native of Ridgefield, CT. 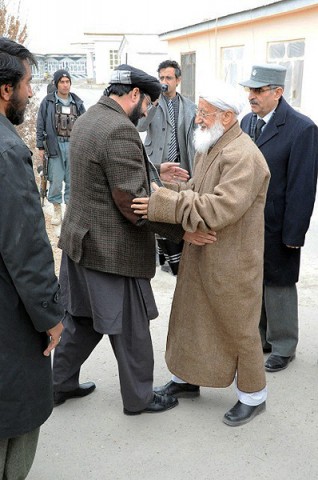 Several elders mentioned that the province needs help in regard to the legal system. Paktika has only 10 of 164 authorized prosecutors, one of 74 authorized judges and 40 of the 99 authorized detention facility personnel. With more than 300 miles of border, Jenkins said this is an important part of the country and the central government can help make long-term improvements in that regard.

While visiting the detention facilities across Afghanistan, Harward and Ghalib set a goal to assess not only the security of the structure and the location, but to make the effort to understand how they can help improve the living the conditions for the detainees.

“First we assess basic security so that the Taliban can’t attack the facilities and free the insurgents,” said Harward. “We want to also check the security within the prisons (and decide) how we address that.”

Then a determination will be made on how living conditions for the detainees within these facilities can be improved.

“How do we help solve the overcrowding? For instance, many of the prisons we visit, most of the inmates have to sleep outside because there is no room inside. But when we provided bunk beds we could double the numbers inside for people to sleep, bringing them out of the weather,” Harward said. “(This gives) them more confidence in their courts and prisons which defeats the messages the Taliban has been sending.”

Jenkins discussed how the Currahees have been working with their Afghan National Security Force partners to ensure the facilities meet Afghan and U.S. standards.

“In accordance with the Afghan rule of law and in accordance with international law, as far as human rights and due process, we work with our counterparts to ensure we have suitable, safe, as well as secure prisons,” said Jenkins. “We work with the guards (and) we work with the prison administration on how to run a good facility. That includes ensuring (the prisoners) get food, shelter, they are warm and not just thrown into a cell — healthcare, communication with families, visitation — the same things we expect for our prisoners back home, (we want to ensure) that the (Afghan) institutions and facilities live by the morals that we expect.”

During their visit, Harward and Ghalib received a brief by the TF Currahee staff about the operations that have taken place in Paktika Province and ways to help and assist the local governments with the processing and prosecution of detainees.

“We wanted to show (them) the importance of tactical biometric enrollments through network targeting and prosecution, so that you holistically look at the (improvised explosive device) or threat cells operating throughout Paktika Province,” said U.S. Army Maj. Scott McLellan, TF Currahee brigade plans officer.

“We also wanted to show the way forward for the ANSF and how they can prosecute,” said McLellan. “It was a way to show methods and to encourage a better way and a more efficient way to prosecute.”