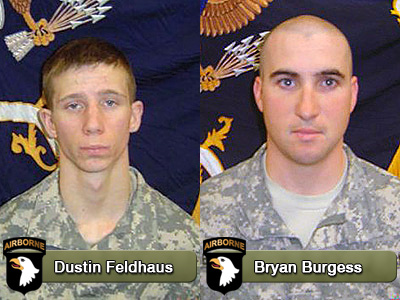 Staff Sgt. Bryan A. Burgess, 29, of Cleburne, Texas. Burgess entered the Army in March 2003 and arrived at Fort Campbell in September 2009.

Burgess is survived by his wife, Tiffany R. Burgess; daughter, Makya Burgess and son, Zander Burgess, all of Fort Campbell, KY. He is also survived by his mother, Linda Pearce of Keene, Texas.

Feldhaus is survived by his mother, Nichol Etchells of Glendale, AZ and father, Bernard Mahaljevic of Maricopa, AZ.

A memorial service will be held in Afghanistan. Fort Campbell holds a monthly Eagle Remembrance Ceremony. The next ceremony will be held April 13th at 4:00pm.