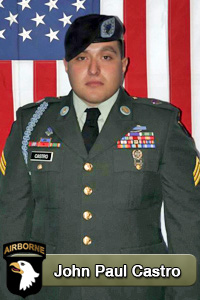 A memorial service will be held for Sgt. Castro in Afghanistan. Fort Campbell holds a monthly Eagle Remembrance Ceremony to honor fallen Screaming Eagles. The next ceremony will be held May 11th at 4:00pm.