First practice that will be open to the public scheduled for Sunday, July 31st

Fans are invited to attend a total of 17 practices during the fourweek camp, all free of charge. It is the only time of the year that practices are open to the general public. The first practice fans can attend will take place at 6:30pm on Sunday, July 31st.

Once again this year the Titans will conduct training camp practices at Baptist Sports Park, where the vast majority of the team’s camps have been conducted since the team moved to Tennessee in 1997.

Training camp will operate similarly to previous years. Free parking is available directly across the street from Baptist Sports Park at the CVS/Caremark corporate offices (445 Great Circle Road). A merchandise tent will be on site next to the practice field selling a wide selection of Titans apparel and merchandise, and cold non-alcoholic beverages will also be available to purchase. Fans can watch practice from the outside perimeter of the three practice fields, but spectators should be prepared to stand in typical Middle Tennessee summer heat for the duration of their visit, as shade and seating are very limited.

With the logistics of training camp largely unchanged, the team itself has undergone significant transformation. Less than four weeks after the 2010 season ended, the Titans announced that the organization and former head coach Jeff Fisher had agreed to part ways, ending a tenure that began in 1994. Then, on February 7th, owner K.S. “Bud” Adams, Jr. announced the 16th coach in franchise history—former Houston Oilers guard, Pro Football Hall of Fame member and 14-year offensive line coach Mike Munchak.

The 2011 campaign marks the 30th season with the organization for Munchak. In a 12-year playing career (1982-93), he started 156 regular season games (seventh in franchise history) and earned nine Pro Bowl invitations. He then spent three seasons (1994-96) as an offensive assistant/quality control coach before taking over the offensive line in 1997.

The roster, assembled by general manager Mike Reinfeldt and his staff, has seen significant additions as well. Perhaps most notably, the team used the eighth overall pick in the 2011 draft to select Washington quarterback Jake Locker, who passed for 7,639 yards and 53 touchdowns during his four-year college career. Reinfeldt also has indicated the team will look to add an experienced veteran quarterback during the free agency signing period, which begins Friday, July 29th, the same day players are scheduled to report for camp. 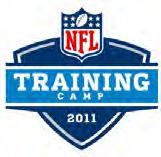 Once training camp begins, the Titans will have just 14 days before they open the preseason on Saturday, August 13th at LP Field against the Minnesota Vikings. By August 30th (tentative date), the roster must be trimmed from 90 to 75 players. On September 3rd, the final roster cutdown will leave the club at 53 players, leading into the regular season opener on the road against the Jacksonville Jaguars on Sunday, September 11th.

For an up-to-date camp schedule, fans can call the team’s training camp hotline at 615.565.4190, or they can go to the team’s official website, www.TitansOnline.com.

Meanwhile, on Monday, August 8th, a limited number of single-game tickets for Titans home games will go on sale. At 10:00am CDT, approximately 3,000 tickets for each of the 10 home contests will be made available for purchase by visiting the ticket office at LP Field, calling Ticketmaster at 1.800.745.3000, visiting any Ticketmaster outlet, or logging on to Ticketmaster.com.

Fans can purchase a maximum of up to four tickets per game for as many as two games.

Training camp practices at Baptist Sports Park are free and open to the public from Sunday, July 31st through Tuesday, August 23rd. The schedule is subject to change. Fans should check www.TitansOnline.com or call the team’s training camp hotline at 615.565.4190 for the latest updates. If there is inclement weather in the area or extreme heat conditions, practice may be moved to the indoor practice bubble, which will be closed to the public due to space concerns.

Training camp is the best time for fans to get an up-close look at the current  Tennessee Titans. It is the only time of the year when practice is open to the public. A total of 17 practices are scheduled for fans to watch from July 31st through August 23rd. For more information on Titans training camp, fans can call the team’s training camp hotline at 615.565.4190 or log on to the team’s official website, www.TitansOnline.com.

At the practice facility, fans are permitted to walk along and watch from the outside perimeter of the three outdoor practice fields. Gates to the practice field generally open 15 minutes prior to the scheduled practice. Fans should be prepared to stand during practice, as bleacher seating is very limited. Workouts inside the practice “bubble” are closed to the public.

Practice Times: Typical start times for training camp are 3:00pm-3:45pm and 6:15pm-6:30pm. Other practice times are scattered throughout the camp schedule, including a 2:00pm practice at LP Field on Saturday, August 6th.

Dress Appropriately: Fans should dress appropriately for the heat of Middle Tennessee. Training camp practices often take place during the hottest portions of the day, and there are very few shaded areas overlooking the practice fields at Baptist Sports Park.

Access To Practice Is On A First-Come, First-Served Basis: Although over-crowding is rare at training camp practices, there is a limit to the number of fans who can safely attend practices. Fans arriving first will be given first priority.

Merchandise And Concessions: A merchandise tent will be open during all practices, selling a variety of Titans goods and apparel. The merchandise tent will be located at the entrance to the practice field. Additionally, a concession stand selling ice cold Coca-Cola products will be open during all practices. Fans are permitted to bring their own refreshments. However, tobacco products and alcoholic beverages are strictly prohibited.

Video Cameras Prohibited: Fans are not permitted to use video cameras during training camp practices and are asked to not bring them onto the premises. Video features on cellular devices are also prohibited from being used. However, “still” photography cameras are permitted.

Weather Conditions: The safety of fans and players is the organization’s top priority during training camp practices. If inclement weather, particularly lightening, is moving into the area, practice may be moved to the team’s indoor practice “bubble,” where fans are not permitted due to space restrictions. Practice also is subject to be moved indoors due to extreme heat conditions. Upon inclement weather, fans may be asked to depart the practice facility.