HomeNewsPolice take Two Suspects into Custody for the Carjacking of a 73...
News

Clarksville, TN – On August 30th, 2011, two men were taken into custody for the carjacking of a 73 year old man. Around 8:00am, a citizen spotted the stolen vehicle at the intersection of Greenwood Avenue and Madison Street and called 911.

He continued to follow the vehicle until he lost sight of it at Providence Boulevard and Peachers Mill Road where he flagged down an officer and told him the direction of travel of the vehicle. 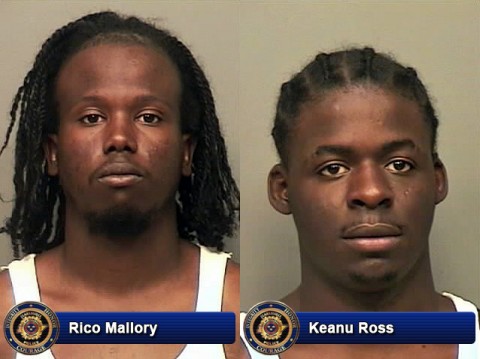 After the citizen left the officer, he was driving down Peachers Mill Road and spotted the vehicle again at a Marshall Drive residence and informed 911 of the location of the vehicle. Officers converged on the residence and surrounded the house around 8:20am.

As officers surrounded the house, the two suspects started to walk out the door, saw officers, and ran back inside. Officers were able to establish telephone communications with the suspects inside of the house and negotiate their voluntary surrender, without incident, around 9:00am. The vehicle was recovered at the scene.

Around 9:30pm, a Montgomery County Sheriffs Office employee provided Detective Nolder a tentative identification of the Mallory and Ross as carjacking suspects.  Around 11:00pm, the victim confirmed that Mallory and Ross as the men that carjacked him.