HomeSportsWestern Kentucky and Belmont next for Lady Govs soccer
Sports

Western Kentucky and Belmont next for Lady Govs soccer

The Lady Govs have been impressive on the pitch, thus far, but will face a much greater test during the weekend set, which begins with a Lady Topper team (2-1) that is 5-0 all-time against the Lady Govs. Although much of Austin Peay’s punch has come from the offensive end, little question exists that its young defense will have to stand up in order to extend a current three-match win streak.

There has been no shortage of offense from the Lady Govs, who have been sparked by a pair of hat-trick games from sophomore Tatiana Ariza. After spending the summer playing with the Colombian National Team at the FIFA Women’s World Cup, Ariza has fueled the Lady Govs, alongside her twin sister Natalia Ariza. They have also been helped by a pair of newcomers – junior Emily Perkins and freshman Claire Pultz – who have added five goals each. 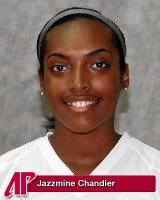 In three games, the Lady Govs defense has yet to allow a goal while facing only 12 shots. In lieu of injuries to Jazzmine Chandler and Sara Kluttz – two players who were expected to lead a young back line – Austin Peay is relying on the experience of junior Renny Robinson and sophomore Corey Osborn to anchor the outsides.

Sophomore Emily Kink, who played all over the field in 2010, has taken post as the center back, while freshman Taylor Van Wagner also is in the mix.

Meanwhile, Guth has been splitting time in goal with senior Mackenzie Ladd and sophomore Haylee Shoaff as competition continues for the starting keeper job. 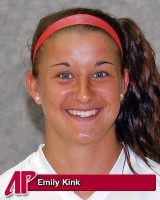 Western Kentucky is reeling off a 2-0 loss at Vanderbilt, a game that saw the Commodores come away with an 8-4 shots advantage. The Lady Toppers did manage to get three of their four shots on goal, but the opportunities were few. The Vandy loss came after winning a pair of season-opening home matches against Western Carolina, 1-0 in OT, and Ball State, 3-1.

Leslie Chinn leads the Lady Topper offense with two goals, while Courtney Rymer and Mallory Outerbridge each have score once. Keeper Libby Stout has made five saves and allowed one goal.