Tucson, AZ – A new Hubble Space Telescope image centers on the 100-million-solar-mass black hole at the hub of the neighboring spiral galaxy M31, or the Andromeda galaxy, the only galaxy outside the Milky Way visible to the naked eye and the only other giant galaxy in the local group.

This is the sharpest visible-light image ever made of the nucleus of an external galaxy.

The event horizon, the closest region around the black hole where light can still escape, is too small to be seen, but it lies near the middle of a compact cluster of blue stars at the center of the image.

The compact cluster of blue stars is surrounded by the larger “double nucleus” of M31, discovered with the Hubble Space Telescope in 1992. The double nucleus is actually an elliptical ring of old reddish stars in orbit around the black hole but more distant than the blue stars. When the stars are at the farthest point in their orbit they move slower, like cars on a crowded freeway. This gives the illusion of a second nucleus. 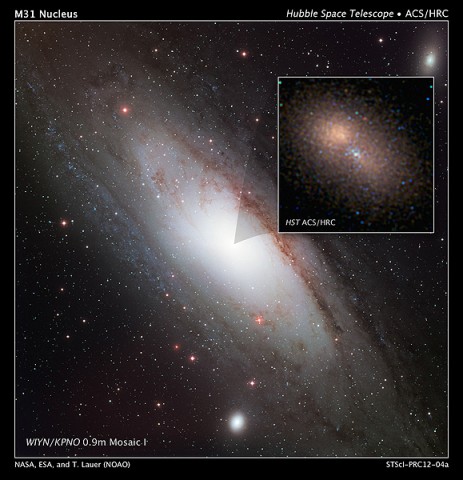 Astronomers are trying to understand how apparently young stars were formed so deep inside the black hole’s gravitational grip and how they survive in an extreme environment.

The fact that young stars are also closely bound to the central black hole in our Milky Way galaxy suggests this may be a common phenomenon in spiral galaxies.

Tod R. Lauer of the National Optical Astronomy Observatory in Tucson, AZ, assembled this image of the nuclear region by taking several blue and ultraviolet light exposures of the nucleus with Hubble’s Advanced Camera for Surveys high-resolution channel, each time slightly moving the telescope to change how the camera sampled the region. By combining these pictures, he was able to construct an ultra-sharp view of the galaxy’s core.

Lauer is presenting these Hubble observations this week at the meeting of the American Astronomical Society in Austin, Texas.

The image of the Andromeda galaxy was taken on January 13th, 2001, with the WIYN/KPNO 0.9-meter Mosaic I by T. Rector, University of Alaska in Anchorage.