HomeNewsClarksville Police have Two men in custody after they robbed a woman...
News

Clarksville Police have Two men in custody after they robbed a woman of $1,000

Clarksville, TN – On March 8th, around 6:30pm, a 21 year old woman told Clarksville Police she had been robbed by three men at the intersection of McClure Street and Spring Street.

According to the victim, she was walking from a bar on McClure Street, a black vehicle pulled up next to her with three men inside, one of them pointed a gun at her and demanded money. She gave them approximately $1,000 and the vehicle drove away. 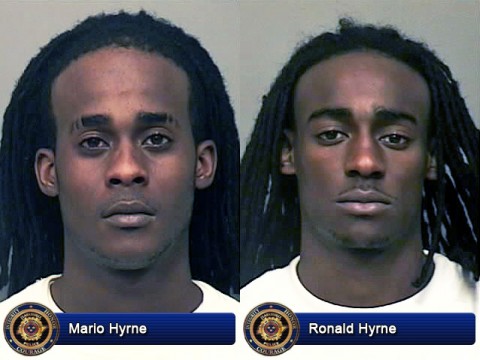 The victim gave Police a vehicle tag number and a description of the suspects. Officer Melissa Spielhagen spotted the vehicle around the 1000 Block of Peachers Mill Road. Before she could pull the vehicle over, it pulled into a driveway and the occupants jumped out.

She caught one of the suspects, Ronald Hyrne, and took him in custody. Ronald Hyrne had a $1,000 in his possession when he was caught.

The victim identified Ronald and Mario Hyrne as two of the men involved in robbing her.

Police are still trying to identify the third suspect.

Ronald Eugene Hyrne has been on Probation since August 2010 and is supposed to remain on until 2016, for Attempted Aggravated Assault, Possession of a Deadly Weapon, and Failure to Appear.

The lead investigator is Detective Justin Bailey. Anyone with information can call 931.645.8477.