HomeNewsClarksville Police Officer spots Vehicle suspected to have been used in Theft...
News

Clarksville, TN – On June 20th, 2012, around 3:00am, Clarksville Police Officer Brian Coghill spotted a vehicle believed to have been involved in the June 18th, 2012 thefts at Best Motors on Fort Campbell Boulevard.

He made voluntary contact with the vehicle’s occupants Daniel Huff and Shawn Jones on the parking lot of Kangaroo Express at which time he found drugs and paraphernalia inside the vehicle. There was also other electronic equipment found in the vehicle. 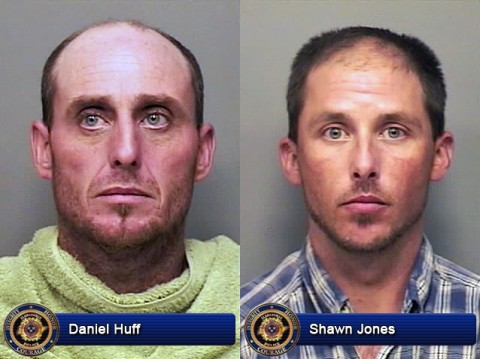 Detective Ronald Parrish was called out and took over the investigation. He determined some of the items in the vehicle were linked to the thefts at Best Motors.

After interviewing Huff and Jones, it was unveiled between the two of them, they had been involved in trying to hotwire and steal a vehicle, broke into a car, and stole a 79 Chevy Silverado from Best Motors.

Furthermore, the investigation lead Detectives to Huff’s residence at 1818 Ogburn Chapel Road, where the stolen 79 Silverado was located. Also, a 1999 Toyota Camry which had been stolen May 15th, 2012 was found on the property. The Camry had been repainted changing it from Maroon to Light Blue.

Daniel Huff has an extensive history involving Theft and Assault.