Adams, TN – Port Royal State Historic Park will host a ribbon-cutting event for exterior restorations of its 1859 Masonic Lodge building on September 29th, beginning at 10:00am. Free and open to the public, the anniversary event will also include 19th century living history opportunities, along with exhibits on the area’s tobacco culture and future plans for the park.

In addition to the ribbon-cutting ceremony, other activities will include a 75th Anniversary presentation by State Naturalist Randy Hedgepath and a presentation on Port Royal – its past, present and future. Attached is the initial communication we shared.

The events of the day begin at 10:00am with special highlights featured:

Cake and refreshments will also be served inside the interpretive Center .

For information on attending this State hosted event please call the park office at 931.358.9696 or e-mail David Britton at

The Tennessee State Parks system was established through legislation in 1937, and those laws – with modifications and additions over the years – remain the framework for park operations today. As in most states, Tennessee began in cooperation with federal programs that instigated individual parks. Later, Depression era recovery programs gave a boost to the idea and the possibility of creating parks. The Civilian Conservation Corps and Works Progress Administration worked on land conservation, but also delved further into the actual planning and construction of what would become the first of 54 Tennessee State Parks.

Today, there is a state park within an hour’s drive of just about anywhere in Tennessee. A 2009 University of Tennessee study highlights the positive economic impacts that state parks provide local communities, particularly in rural areas of the state.  The study found that for every dollar spent on trips to Tennessee State Parks, an additional $1.11 of economic activity was generated throughout the state. When the direct and indirect expenditures were combined, the impact of Tennessee State Parks to the state’s economy was $1.5 billion in total industry output, supporting more than 18,600 jobs. 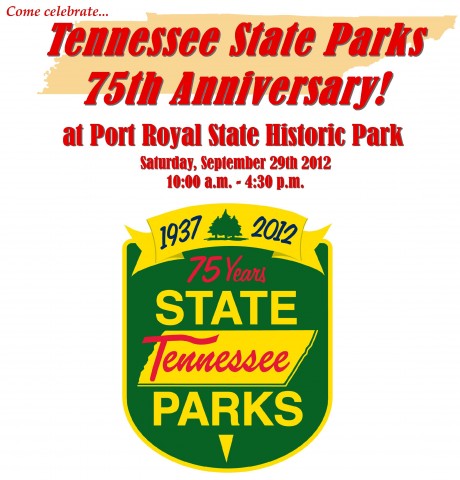 Port Royal is designated as an official site on the Trail of Tears National Historic Trail. The Trail of Tears commemorates the forced removal of Native Americans from their homelands in the Southeastern United States and the paths they traveled westward in 1838 and 1839. Diary records of the removal mentioned Port Royal, the last stop before leaving Tennessee, as an encampment site where the Cherokee stayed overnight or longer to re-supply, grind corn and rest.

Port Royal State Park is the second Tennessee State Park to be named an official site on the Trail of Tears National Historic Trail, joining Red Clay State Historic Park in Bradley County. Other official sites in Tennessee include Audubon Acres, Brainerd Mission Cemetery and the Chattanooga Regional History Museum in Chattanooga and the Sequoyah Birthplace Museum in Vonore. For more information about the Trail of Tears National Historic Trail, visit www.nps.gov/trte .

Located in Adams, Tennessee, Port Royal State Park is a day-use park. In 1977, the state of Tennessee received the deed to 26 acres of land in the Port Royal area and designated it as a state historic park in 1978. Settled in the early 1780s, Port Royal was a known Longhunter camp as early as 1775.

The town of Port Royal was founded in 1797 and rose to great prominence in the early part of the 19th century because of its strategic location at the confluence of the Red River and Sulphur Fork, providing northern Middle Tennessee and South Central Kentucky access to a central flatboat port and major stagecoach route. In addition to its many historic features, the park offers boating, fishing and hiking.

For more information about the park, including directions, please visit www.tnstateparks.com/PortRoyal .