Murfreesboro, TN – After serving as host to its own tournament, Austin Peay State University women’s golf team won’t travel far this week to play at the Blue Raider Invitational, to be held at Old Fort Golf Club. 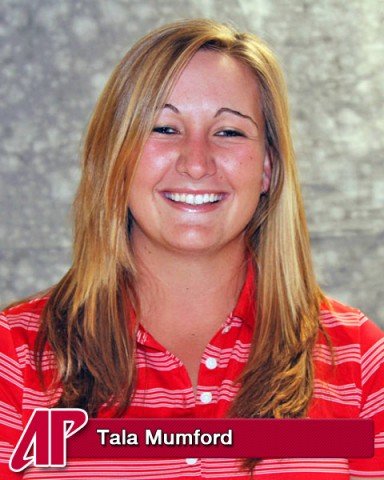 The Lady Govs are coming off a fifth-place finish in their own tournament. The Lady Govs were third after the tourney’s first day, but struggled on the final day, shooting an uncharacteristic 322.

“We had a short time to work on some key things after our event,” APSU coach Sara Robson said. “We have taken a look at our weaknesses and concentrated around the greens and talked about some of the mental mistakes we made.

“We are very capable of playing very well and this team expects to shoot low numbers. That is what makes them so fun to work with.”

The Lady Govs will be facing several teams in this tournament they have yet to see this fall. Although some of the Lady Govs are familiar with Old Fort in the past, the course will be challenging.

“We are excited to play in Murfreesboro and compete against some great schools,” Robson said. “We need to take full advantage of our practice round and become familiar with the golf course.  There are a few holes at Old Fort that you have to play smart in order to score, that will be our top priority…to play smart.”

Junior Tala Mumford, playing her best golf of her APSU career, has been the Lady Govs, most consistent golfer this fall. She shot a pair of 75s in the F&M to finish third.

Mumford will be joined in Murfreesboro by freshman Jessica Cathey, seniors Tabitha Beard and Holly Batey along with sophomore Meghan Mueller.

“Tala is having a great season and we are looking for her confidence to help catapult the team’s confidence,” Robson said. “We need our veterans to step up and use their experience to help us finish strong this week.