HomeEventsRoxy Regional Theatre flys you away to Neverland with Peter Pan starting...
Events

Clarksville, TN – “Second star to the right, and straight on ’til morning …” Let your inner child soar to new heights and fly away to Neverland with the Roxy Regional Theatre!  Enchanting fun for audiences of all ages, the award-winning Peter Pan: A Musical Adventure makes its regional premiere on Friday, April 12th, at 8:00pm.

Based on J.M. Barrie’s original play, with permission from Great Ormond Street Hospital for Children, Peter Pan features music and lyrics by George Stiles and Anthony Drewe (award-winning composers of Honk! and Mary Poppins) and book by Willis Hall.

Under the direction of Tom Thayer and choreographer Jessica Davidson, along with flying effects provided by ZFX, Inc., the Roxy Regional Theatre brings to life the magical world of Neverland through spectacular scenes of flying, swashbuckling and sheer fantasy. 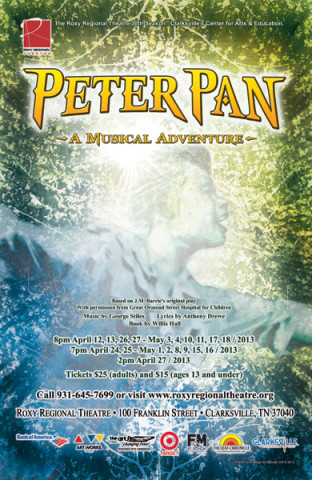 This production is made possible in part through the generous support of Bridgestone Metalpha USA, Inc., and Valerie Hunter-Kelly & The Air Assault Team of Keller Williams.

Peter Pan: A Musical Adventure runs April 12th through May 18th, playing Wednesdays and Thursdays at 7pm and Fridays and Saturdays at 8:00pm, with a 2:00pm matinee on Saturday, April 27th.  (There are no evening performances on April 17th, 18th, 19th and 20th.)

Friday, April 12th, at 8:00pm is the pay-what-you-can preview for Peter Pan. All tickets not pre-sold at the regular ticket price will go on sale at 7:30pm that evening for whatever price patrons wish to pay.