He replaces Gary Shephard, who retired from coaching earlier this year. 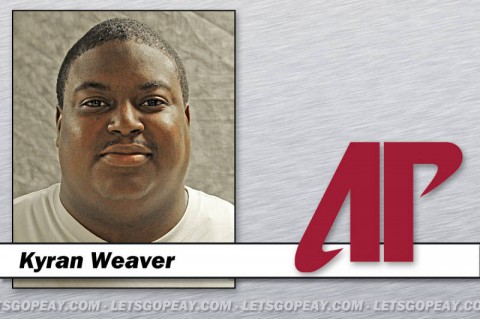 Weaver’s most recent coaching experience was a two-year stint at Harper College in Pallentine, IL, a former junior college national championship program that was dropped after the 2011 season. Weaver worked in the private sector since early 2012 but jumped at the chance to return to coaching when former mentor Kirby Cannon called.

“Kyran (pronounced Kie-ran) is a good man and was a good player and coach for us at Rolla,” Cannon said. “I never ever remember Kyran Weaver not doing what he was supposed to do. He is just a great example and we need someone like that on our coaching staff who can say ‘I did it this way so you can do it this way.’

“I think he will bring day-in, day-out doing the right thing on the field, off the field and in the classroom. That was a guy who I wanted to bring into the program as my first coaching hire. I feel very lucky to get him.”

Weaver is a certified strength coach and will work with APSU athletics strength and conditioning coordinator Nick Honzik to best assist APSU football players. Prior to being at Harper College, Weaver coached three seasons at this alma mater, Missouri S&T. While with the Miners, Weaver coached the defensive line that proved to be the best against the run in the Great Lakes Football Conference during the 2008 season.

Weaver spent the 2006 season as a student assistant while completing his bachelor’s degree work in biological sciences. He coached the defensive line that season, propelling his desire to enter the coaching profession.

During his S&T career, Weaver played at linebacker and defensive end and had a career-high 47 tackles during the 2002 season. He had 14 tackles and three sacks in his senior year and also had an interception which he returned for a touchdown.

His younger brother Kellen, also played linebacker for the Miners from 2006-09.

A Country Club Hills, IL, native, Weaver forged an impressive football career at Hillcrest High School. He was an honorable mention all-state selection by the Illinois State Coaches Association in 2000 after being twice named to the South Inter-Athletic Association All-Conference (SICA) for his play on the field and his academics. He was chosen SICA Central Conference Player of the Year in 1999 and CBS Prep Star all-region as a senior.