Clarksville, TN – Austin Peay State University’s volleyball team will attempt to climb back into second place in the Ohio Valley Conference when it hosts Belmont in a 6:00pm, Friday contest at the Dunn Center.

Austin Peay (10-17, 7-4 OVC) sits a loss behind both Belmont and Eastern Illinois for second place in the OVC’s regular-season standings.

The Lady Govs snapped a two-match losing streak with Tuesday’s sweep of Tennessee State and will look to close the home portion of their home conference slate with a win, Friday.

“We still have a lot to play for in the conference race,” said Lady Govs head coach Taylor Mott. “We are going to need performances like we had against Tennessee State on a consistent basis the rest of the way. Lauren (Henderson) has really stepped up her game the past couple of weeks.”

Senior Lauren Henderson has been the hottest Lady Govs player over the previous 20 days. During that seven-match span she has been second on the team with 82 kills (3.15 per set) while posting an impressive .363 attack percentage.

However, it has been her defensive effort that has stood out. Henderson has posted 40 blocks in eight matches, averaging 1.54 blocks per set. That has allowed her to take over the OVC’s top spot among blockers, her 1.44 blocks per set in conference play stands 24 points better than second place. 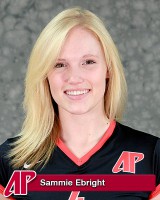 Henderson has had support during that seven match burst. Junior Jada Stotts leads the team with 84 kills (3.23 per set) during the stretch. Freshman Sammie Ebright has added 61 kills (2.35 per set) on the other side of the offense.

“We saw Tuesday what could happen if everyone got onto the same page,” said Mott. “During the previous two weeks we were out of sync, especially in our passing, and we suffered for it. I believe if we focus on what we’re doing the rest of the way, we will make a big statement.”

Belmont (14-12, 7-3 OVC) enters this weekend’s action as the OVC’s hottest team, with a six-match win streak. They return to the road after closing a four-match homestand during which they lost just two sets. The Bruins will visit the Dunn Center with just a 2-6 mark in true road games this season.

Seniors Jamie Lundstrom (4.56 digs per set) and Jen Myer (4.34 dps) anchor that back-row defense, ranking sixth and eighth among OVC players in digs. Belmont is the lone team in the OVC with two players ranked among the league’s top 10 in digs.

Belmont won a four-set decision last season’s in Nashville, the first meeting between the two programs as Ohio Valley Conference members. It was the Bruins seventh consecutive win in the series. Austin Peay holds an 11-7 edge in the series all-time but has not won since 2004.