Clarksville, TN – As a freshman last season, Chris Horton made a splash for the Austin Peay State University men’s basketball team as a big-time shot blocker and solid rebounder, but still a work in progress as a scorer.

But the 2012-13 Ohio Valley Conference Freshman of the Year has stepped up his game as a sophomore showing he can be a force on both ends of the court.

The Decatur, GA native has posted a double-double average in both scoring and rebounding through the first seven games of the season for the Govs, currently sitting at 12.6 points per game and 10.1 rebounds.

Those totals are 4.4 points per game better than last season, while the rebounding is an improvement of 3.3 per game.

“I think he’s staying closer to the hoop and we need him to do that,” Austin Peay coach Dave Loos said. “I think he’s more effective when he stays around the basket. 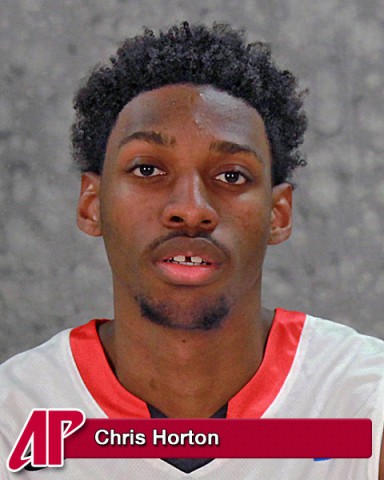 “(Horton) could be a force in the league for sure and he is right now defensively. He’s working at the other and I’m encouraged at what he’s doing.”

He has especially turned things up the past the past week or so, averaging 18.3 points per game – including scoring a career best 23 points in a November 23rd 78-72 victory over Montana State at the Central Michigan University Tournament.

“I’ve got to give all the credit to all my teammates,” Horton said. “DD (Damarius Smith), Zavion (Williams), Travis (Betran), and everyone else just made it possible for me to score. They gave me the ball in my open spots and I just made them (shots).”

But he also added that a lot of off-season work has helped too.

“When I went home in July for the summer I had some workouts with my old AAU coach and just tried to work on my offensive skills and my defensive skills,” he said. “I feel now that I’m more confident in my shots and what I do on the court offensively.”

That confidence has shown up in his shooting percentages, going from 54 percent from the floor last season to a current mark of 62.1 this season, while at the line he is connecting on 66.7 percent of his free throws, compared to just 55.4 percent as a freshman.

“I’m encouraged with his free throw shooting,” Loos said. “I think he has better technique and we’ve spent some time on that.

“I just think if we can keep him around the basket and keep him taking shots that are good for his game he’s going to shoot a good percentage.”

But Horton knows he still has a lot of work left to reach his full potential.

“Finishing around the rim can be better,” he said. “I’m better this year than last year, but I can still get better at that and free throw shooting and limiting fouls.

Last year everyone saw me as a defensive player and I know that I can do more than that, so I’m going to try to do that without taking myself out of the game, or hurting the team.”