Clarksville, TN – With its season’s first victory in hand, Austin Peay’s baseball team (1-2) will seek to build on its momentum when it hosts the Southern Illinois Salukis (1-2) in a 3:30pm, Tuesday contest at Raymond C. Hand Park.

The Govs 2014 campaign got off to a rough start as they lost both ends of a Saturday doubleheader to Iowa.

However, they recovered to claim the series finale, Sunday, and give head coach Gary McClure his 800th career win. Southern Illinois opened 2014 with a win at Western Kentucky, Saturday, but dropped both games of a Sunday doubleheader.

APSU head coach Gary McClure is one of 28 active Division I coaches with 800 wins, he is APSU and the OVC’s all-time wins leader.

Freshman utility man Ridge Smith was named the Ohio Valley Conference’s Player of the Week after leading the Govs with a .600 batting average (6-of-10), 4 doubles and 7 RBI in the series against Iowa.

Senior catcher P.J. Torres had 5 hits and 6 RBI in Saturday’s doubleheader, including a 3-run home run in Game 2.

Torres, senior first baseman Matt Wollenzin and freshman third baseman Alex Robles each had a triple during the opening weekend. Senior right fielder Rolando Gautier batted in the Govs 3-hole all weekend and had 4 hits, 1 RBI and 3 walks as well as recording the season’s first outifeld assist.

It was a rough Saturday for the Govs defense, which was charged with a APSU record-tying 8 errors in the season opener before a 5-error outing in the nightcap. The defense settled down in the series finale, with just one error. 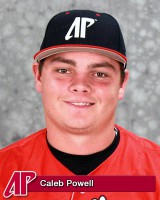 On the mound, the Govs bullpen combined for a 1-1 record and 1 save with a 4.32 ERA. Sophomore reliever Tommy Hager tossed 1.1 scoreless innings to win, Sunday. Sophomore closer Jared Carkuff picked up a save in his first opportunity. The starting trio combined for an 0-1 mark and 6.97 ERA with six strikeouts in 10.1 innings.

Freshman right-hander Caleb Powell will get the nod to make his first start, Tuesday, after a brief relief appearance, Sunday.

This season, Austin Peay was picked to finish 2nd in the OVC’s preseason poll behind defending regular-season champion Tennessee Tech.  The Govs did not have a player selected to the preseason All-OVC squad with only senior catcher P.J. Torres the only returnee to receive All-OVC honors (2nd team) last season. Torres and senior right fielder Rolando Gautier are the only returning defensive starters for the Govs this season.

Southern Illinois opened the season with a 3-2 win at Western Kentucky, Saturday, before losing both games of a Sunday doubleheader (6-4 and 6-1).