Clarksville, TN – After seeing his 2013 baseball season come to an end following a broken arm suffered by being hit by a line drive, Austin Peay State University redshirt junior A.J. Gaura is still working his way back to the Governors starting rotation.

Gaura was listed as the Govs number three starter, but arguably was pitching as well as anyone on the pitching staff, when he was hit by a line drive by Michigan State’s Ryan Krill in the third inning of his third start of the season breaking his arm and ending his season.

“I did see it coming the whole way (the batted ball) and I’ve had ball hit off of me before,” Gaura said. “But this time it just happen to hit me in the right spot in the elbow where it broke something.”

The injury required surgery and rehab over the rest of the spring and summer, as he got ready for this past fall season and the current spring campaign. 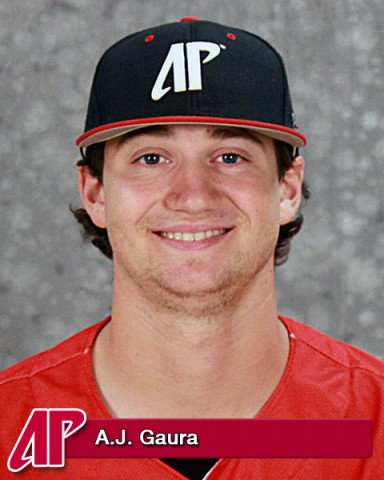 “It was your typical ‘Tommy John’ rehab protocol we went with, with the throwing program and then all the rehab exercises and such, Gaura said. “Basically, about a month-and-a-half after surgery was when I started throwing again and then it progressed through the whole summer and all the way through the fall.”

Gaura was slowed a little in the fall after suffered a little tightness in the arm, but has overcome that slight setback to feel better than he has in quite a while.

“Right now it’s the best I’ve felt since before I had the surgery,” he said. “It seems like each day and each week it gets better and hopefully I’ll be able to start again soon, if not I’ll just keep my roll where I’m at (pitching in relief).”

So far this season Gaura has appeared in five games – all in relief – giving up just three hits in 5.2 inning of work, while striking out nine and walking three.

“All it is for me is a different type of mentally,” he said. “Because now when I go out there I know I only have three outs, so I go full bore, 100 percent, where as if I was starting I may be pitching at 75 percent the first inning to make sure I can extend late into the game and keep my stamina up.”

Still, the goal is to get him back into the starting rotation at some point of the season.

“Where have been talks about it and I’m sure it might still happen depending on how the pitching staff as a whole works out,” Gaura said. “I hope that works out, because that was our goal at the beginning of the year, getting into conference and extending my innings out more.”

But as Gaura continues to work his way back to a role as a starting pitcher for the Governors, he first thought is to just be able to help the team win.

“I’m just trying to help the team win in any way possible,” he said. “I can’t just focus on myself because the better we are as a team the more recognition from the outside world and that is only going to help us.”