The game’s next pitch saw Smith steal second base. Left fielder Cayce Bredlau moved Smith to third with a sacrifice bunt and, after a walk, designated hitter Dre Gleason brought the run home with a sacrifice fly.

However, after Robles first-inning walk they would not produce a base runner again until the two outs were gone in the fourth inning. While the Govs would get a runner in scoring position in the fourth, fifth and seventh innings it did not come until two outs were on the board and they could not find the hit they needed to produce a run. 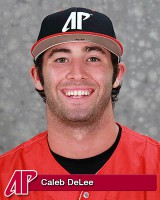 Meanwhile, Austin Peay starting pitcher Caleb DeLee was doing his best to keep the game close. He retired the first seven batters he faced before surrendering a pair of singles in the third. The Govs defense eliminated the threat with a double play.

DeLee would not fare as well in the fourth after allowing back-to-back singles to start the inning. The Govs defense helped when center fielder Chase Hamilton caught a runner attempting to advance to third. DeLee would get a second out, but the Hilltoppers got back-to-back base hits to score twice and take the lead.

Western Kentucky (15-14) would add to its lead in the sixth when DeLee allowed a leadoff walk. The Hilltoppers would bring that run home with a sacrifice fly. Western Kentucky tacked on two runs off the Govs bullpen.

Austin Peay would make things interesting in the eighth and ninth innings. Western Kentucky brought in closer Ian Tompkinsto start the eighth and he got back-to-back strikeouts to start his outing. However, the top of the Govs order dug in and three straight Govs batters reached base, second baseman  Alex Robles singled to drive in a run. However, the Govs could not extend the inning.

The Govs would then load the bases in the ninth, forcing Tompkins from the game after pinch hitter Grifin Ganick walked to load the bases with two out.  Reliever Brennan Pearson came on and induced a game-ending strikeout to end the threat.

DeLee (1-2) suffered the loss despite becoming the fourth Govs pitcher to record a quality start. He finished with a career-best six-inning outing, allowing three runs on seven hits while striking out four.

Right fielder Tommy Hager paced the Govs offense with a 3-for-4 outing. Shortstop Garrett Copeland was 2-for-4 on the day.

Western Kentucky starter Seth Higgs picked up the win after holding the Govs to one run on four hits in five innings. Pearson picked up his first save with a six-pitch outing.

WKU second baseman Scott Wilcox and catcher Ryan Messex were both 2-for-3 with two RBI.