Clarksville, TN – “Two worlds, one family.” The classic story of an outsider trying to fit in is at the heart of the Roxy Regional School of the Arts annual spring musical, Disney’s “Tarzan”, playing May 16th – May 31st.

Based on Edgar Rice Burroughs’ “Tarzan of the Apes” and the hit Disney film, this action-packed musical tells the story of an infant boy orphaned on the shores of West Africa. Taken in and raised by a tribe of gorillas, Young Tarzan (played by Riley Jenkins) strives for acceptance by his ape father while grappling with his uniqueness.

When a human expedition enters the jungle, Tarzan — now a man (played by Julio Iguina-Pascual) — encounters strangers like himself for the first time. 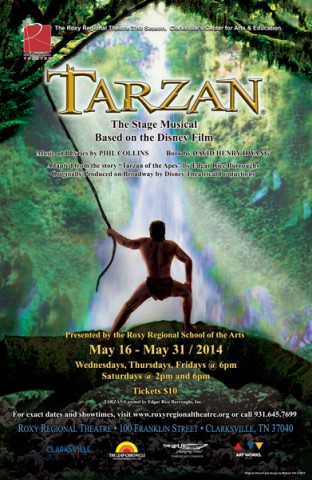 Disney’s “Tarzan” is directed by Tom Thayer and choreographed by Jessica Davidson.

On Saturday, May 24th and May 31st, patrons are invited to attend “Me Tarzan, You Jane: A Swinging Tarzan Party” before the matinee. The party starts at 1:00pm across the street at Edward’s Steakhouse (107 Franklin Street) with lunch (chicken nuggets, macaroni and cheese, french fries, beverage and dessert), photos with Tarzan, jungle crafts and more! Tickets are $25.00 for the package, which includes the 2:00pm performance of “Tarzan”. All children must be accompanied by a paying adult.

This production is made possible in part through the generous support of Dan & Michelle Dickerson, Chris & Nicole O’Connor, Melissa A. Schaffner, Dr. John & Cathy Stanton, and Starlene Sykes.

The Roxy Regional Theatre is located at 100 Franklin Street in Downtown Clarksville.